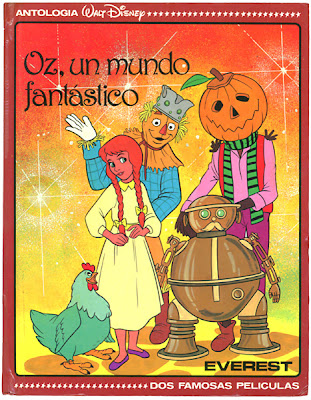 I recently got a very interesting and quite pretty Return to Oz book.

Oz, un mundo fantástico is a Spanish picture book published by Everest in 1987. The hardback book measures approximately 8 1/2" x 11". What makes the book so interesting is that it is illustrated with drawings - not just photos from the film like most of the foreign Return to Oz books feature. And the illustrator has borrowed (or ripped off) character designs for many other Disney films to create the illustrations. It's kind of neat actually.

On the cover you can see that Tik-Tok, Jack Pumpkinhead, and the Scarecrow are all based on their RTO film likenesses. The Dorothy does not look like Fairuza Balk but she looks very familiar. Alas I haven't been able to place her. Note that Billina is green! I have no idea why, but the ultra-rare Japanese stuffed Billina was green, too. 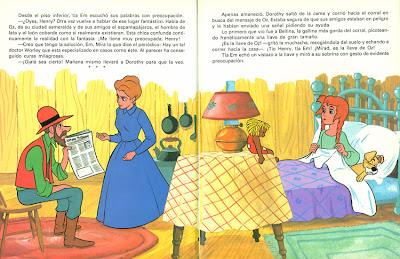 Ok, now the fun starts! Notice that Toto is actually Tramp from Disney's Lady and the Tramp. Aunt Em looks a bit like the wife in that film, too. But I could be wrong. Anyone recognize Uncle Henry? Note too how much that copper lamp on the table resembles Tik-Tok. As always, you may click on an image to enlarge it. Look who the illustrator picked to play the blonde girl from Dr. Worley's hospital! Can you identify the character filling in for Nurse Wilson. I really like the way the illustrator has made each spread work as both a double-page illustration as well as two "single" pages - a trick created by having one background serve for both pages. 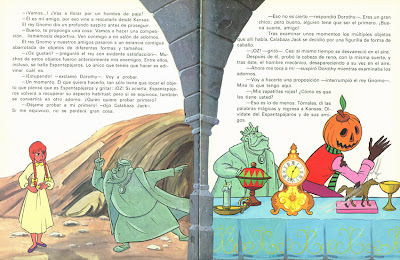 Here we get a Nome King created by "petrifying" one of the Kings from Sleeping Beauty. This double-page spread isnt quite as successful as the others. 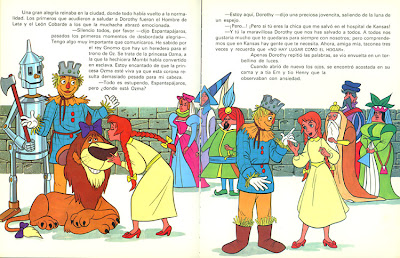 So where did this Lion come from? He too looks familiar and he doesn't appear to be very based on the RTO lion. These were only a few of the pages - it's a handsome volume and very atypical of the foreign RTO books. This hardcover also features a second story, El patito feo (The Ungly Duckling).

There is also a much smaller paperback version of this Return to Oz book. It does not have a second story and it lacks one page of Return to Oz artwork included in the hardcover edition.

Nurse Wilson is Lady Tremaine from Cinderella. The Lion is the Lion king from Bedknobs and Broomsticks.

Not sure about Dorothy there. She also looks a bit like Alice, but her dress and hair are different.

I also think it's worth noting that the bedknobs and broomsticks design is similar to the sketch of the Cowardly Lion presented to Walt Disney by the Mousketters in the "Rainbow Road to Oz" special.

I think the Green hen might have it's origins in Robin Hood... but I could be mistaken.

Goody i can say so here:

It wasn't until NOW, seeing this blog, that I could see dorothy looks like Princess Eilonway from "the Black Cauldron"!!

I can just make out the paper saying "Kansas Tribune" - I don't believe uncle Henry is modelled after anybody, but the Nome King derives his appearance from King Hubert (Prince Phillip's father). But I don't see why Jack Pumpkinhead has to be such a slapper with the ornaments (a pose repeated in the official movie comic too).

Maybe Lion is "the Sheepish Lion"?

Uncle Henry seems to be based on the basic male hillbilly design from "The Martins and the Coys," a segment of MAKE MINE MUSIC that's been omitted from more recent releases.
He appears to have been "de-hillbillified" by modifying the hat design, giving him shoes and non-tattered clothing.

If I see another design that looks even closer, I'll update this later—but for right now that's my guess.