Map of Oz Monday - Merry Go Round in Oz 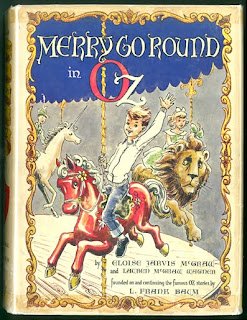 Today we explore the mapping of Merry Go Round in Oz (1963). Chronologically this post should come in the midst of our discussions on the Oz Club's maps, which were first published in 1962. But structurally, it seems best to finish our discussion of all the maps in the main forty Oz titles before we delve into the Oz Club's maps.

Merry Go Round in Oz was written in 1963 by Newbery Honor author Eloise Jarvis McGraw and her daughter Lauren McGraw Wagner. Many Oz fans consider it one of the very best post-Baum titles.

So let's look at the included map. This map was drawn by the book's illustrator, Dick Martin; but it was very much influenced by a map or maps drawn by the McGraws. We'll discuss that further below. My first observation is that Dick Martin did not pay any careful attention to the delineation of the Quadling/Munchkin border. He has simply drawn a curvy line.


As you can see, the map splits the difference between a traditional "flat" map and an "illustrated" pictorial map, i.e. the Easter Bunny's Cave is indicated by a basket and eggs. Below you can see how Martin rendered the same locations in the later printings of the Oz Club maps, in the "flat" style.


On March 27, 1963, Reilly & Lee wrote to McGraw and told her that they were accepting the manuscript of Merry Go Round in Oz; and on April 1st, McGraw wrote a lengthy letter back to the publisher. Halfway through the letter McGraw wrote:

Speaking of illustrations, a couple of years ago my daughter, Laurie [co-author Lauren Lynn McGraw], drew a map of Oz for her own amusement, placing on it all the little countries and castles and so on that she could find by looking through old Oz books. It is an "illustrated" map; that is, the little country of Ragbad is indicated by a patchwork quilt, Pumperdink by a portrait of Kabumpo, Monday Mountain by blue hills and a washtub, etc. It's charming and gave me the notion that just such a thing would be fun for endpapers in the book. The territory covered by the travelers in this book could of course be drawn in, with their routes traced in dotted lines. Laurie's map reverses the positions of the Munchkin Country and the Winkie Country and contains a few other errors, but if you want a corrected version as a suggestion and source material for the artist, let me know. She or I one can easily draw an accurate one. In any case, using a map as endpapers may not appeal to you or the artist; please don't think I'm trying to urge it on - merely an idea.

It will turn out that Lauren McGraw's directions were correct, or at least, that she was using the Baum "Munchkins in the East" directions. Eloise was more deeply rooted in Thompson's Oz and was more familiar with Thompson's predominant "Munchkins in the West" viewpoint. But back to our discussion: Merry Go Round editor Maxine Rieckoff didn't address the map idea until her reply of April 24, 1963:

When I wrote you before, I realized after the letter had gone that I had not mentioned Laurie's maps. I think they would make charming end papers and would like to have you send them on. Incidentally Laurie may not have made a mistake in the positions of the Munchkin Country and the Winkie Country. Dick Martin told me a mistake had been made in the printing of certain maps which was later corrected. He gave me a couple corrected maps to send Laurie.


These are no doubt the then-very-new Oz Club maps that Dick Martin had just finished drawing only a few months earlier. Below are Dick Martin's typed notes on Oz Geography which he stresses are "small technicalities, but important."


Clearly Martin is trying hard to prevent conflicts with the new Oz Club maps he and Jim Haff worked so hard on. He mainly points out places where McGraw needs to simply reverse east and west. But he also explains that one can't pass the Scarecrow's Tower and Tin Woodman's castle on one's way in the Munchkin Country as both structures are in the Winkie Country. Lastly he tells McGraw that there is no Yellow Brick Road where she placed one as a border dividing the Munchkin and Quadling countries.

Note that McGraw dutifully check-marked each of Martin's suggestions as she implemented them. McGraw wrote Rieckoff back on May 12, 1963: "All [Mr. Martin's] geography suggestions are taken care of now. . . . I am very eager to see how Dick Martin will interpret my characters. I'm sure, fundamentalist that he is, he will see them much as I do."

The map will go off to you today. As it turned out, I drew it myself; Laurie lives twenty miles or so from here, doesn't drive, and has an extremely active 7-month-old son to take care of. I could see the new version of the map wasn't going to get done in time for publication if she had to do it. Anyway, it was my idea to revamp it and submit it for possible use as endpapers, so it was really my responsibility anyhow.

I had a wonderful time for a couple of days and evenings, doing it - nearly blinding myself but enjoying every minute of it. I've corrected the location of various places, in line with the "official" Oz map you sent, and of course added all the places mentioned in Merry Go Round in Oz; otherwise it's merely a recopying of Laurie's old map. Therefore it's still a collaboration, and I've signed both our names to it.

I've no idea whether it will be usable or not, but if possible, I'd like to have the original back when everybody's finished with it there. I got rather fond of it while I was working on it, and think it would be fun to have on my study wall. By the way, see what you think of the Halidom coat-of-arms I invented. Upper left hand corner of the map. Those things in the left half are a trefoil (fleur de lys), a quatrefoil, and a cinqefoil.


Sadly there is a break in the editorial correspondence until July 12, 1963. Rieckoff explains that she is freshly out of the hospital, but there is no indication from her on what happened to McGraw's map drawing. But the answer can be found in Dick Martin's correspondence with McGraw. On June 12, 1963, Martin wrote:


Lauren's map is a great addition - the Oz fans will be especially pleased with it. I copied the section covered in the story, and the travelers' routes, labeling it "Diagram of a Journey - drawn by Robin Brown & helped by Dorothy and Fess." It will be in the front of the book. By the way, I'd like to include Lauren's drawing in the "Oziana Exhibit" at the Oz convention next week, as it will be of great interest. I'll return it promptly afterwards.


The map is actually my drawing - based on an old one Laurie did once for her own entertainment. Both of us love to draw - in fact, I spent ten years, in my younger days, learning to be a muralist and portrait-painter. . . . Anyway both Laurie and I are flattered that it will be (or has been, I guess, by now) exhibited at an Oz convention.

One must assume Martin dutifully sent the map back to McGraw after the Oz convention. But Eloise never mentioned the map in her various Oz-related interviews later, it was not hanging in her study when I visited, and Lynn McGraw no longer knows where either her mother's or her own Oz map ended up.

I am glad that a portion of the McGraw map got used in Merry Go Round in Oz, but I really wish that the McGraw map had been used as the endpapers to the book as was originally planned!

Click here to go to our next installment of Map of Oz Monday! 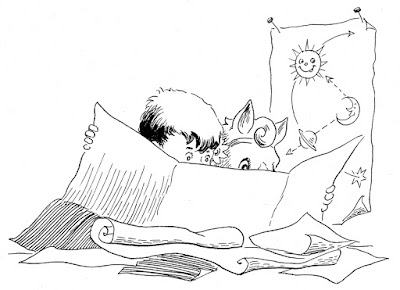 David, will you be commenting on the maps featured in the Spring 1963 BAUM BUGLE?

Yes, I plan to discuss at least some of them - if not all. I'd love to find a copy of Irene Fisher's map in color but I have never seen one.