Giant Garden and the Grand Tour! 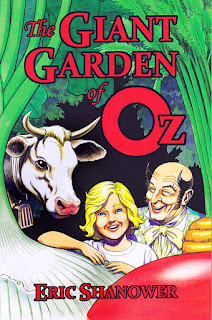 A brand new edition of Eric Shanower's first Oz novel, The Giant Garden of Oz, has just been published by Dover Books! This story has always been rather special to me, and, in fact the book is dedicated to me. The story of the writing of this book and why I got the dedication has never been told - until now!

So get out your passports and be prepared for a Grand Tour of Europe and we'll tell the tale of the creation of The Giant Garden of Oz!

In the Summer of 1989 Eric Shanower and I decided to make our first trip to Europe. We had been a couple for about a year and a half, though we were still living on opposite coasts at that point - Eric in San Diego, me in college at NYU in Manhattan.

We planned a Grand Tour, cramming in everything we possibly could. This over-stuffed trip played an important part in the creation of The Giant Garden of Oz. Here is the story:

Eric flew to New York a few days before my junior year of college let out. At which point we both flew to London where we spent several museum and theatre-packed days. We took side trips to Stonehenge and the Salisbury plain, hit up Oxford, York, went on up into Scotland where we visited Edinburgh and Sterling.


Then it was back to London and off to Dover to make the crossing to France. We arrived in Calais, visited the cathedral in Amiens, and journeyed on to Paris where we spent several days.


We also spent an afternoon with French cartoonist Jean "Moebius" Giraud at his apartment in Paris. Eric was working with Moebius at the time on The Elsewhere Prince.


We took a day to go to Chartres, and then a very fun side trip up to Mont Saint Michel where we followed my Art History teacher's advice and spent the night on the island (an even more magical place once most of the tourists have fled as the tide came in). We went to Versailles for a day and then journeyed south to Marseille, traveled to Nice, made a lovely afternoon side trip to Èze (at the suggestion of Oz friend Peter Hanff).

Then after a short visit to Monaco we hopped back on the train for Italy. As I recall we stopped in San Remo and had pizza at the quaintly named "Snow White" pizzeria. This was not "white" pizza but "Snow White" as in seven dwarfs! Then on to Milan, followed by a wonderful day or so in Brescia where my college roommate's family lived. They entertained us wonderfully! Then back on the train to go to Venice (which I loved!).

From Venice we went to Ravenna and then Florence (which was very disappointing).  I had hoped for a life enriching experience a la Room with a View, but found it instead came across as the worst tourist trap on earth - harassed by peddlers selling "Statue of David" key chains and charging astronomical fees for the crappiest food ever. But on to Rome to do as the Romans do.


We had to cancel our planned trip to Naples and Pompeii due to a train strike - so headed for the heel of the Italian boot where we boarded a large boat for an overnight cruise to Patras, Greece, which seemed a boring modern city. Luckily we proceeded directly on to Athens where we spent several days. The Parthenon and some of the museums were great, but on the whole I rather hated Athens. (I went back to Greece a couple years ago for a several week visit and found it wonderful!)

Are you getting tired yet? Well, we've still got more trip to go! We hopped on the train from Athens to Vienna. It sounds romantic, visions of the Orient Express come to mind, but it was a hot, noisy and unpleasant journey. The most interesting aspect (in hindsight) was that the train took us thru Yugoslavia - we stopped very briefly in both Belgrade and Zagreb. I remember thinking the country looked so incredibly pastoral, near idyllic with jolly peasant women herding sheep, artsy young students driving their Yugos, etc. . . well, the next year the country shattered into a multi-participant civil war. We truly are getting to the Giant Garden of Oz part of this story, I promise!

We arrived in Vienna. It was lovely! We took lodging in a Viennese woman's home - a sort of bed-and-breakfast, though I'd not heard that term yet. We went out walking and ate sausages and drank beer. We tried to get tickets to the Vienna Opera to see Tristan und Isolde, but neither of us felt up to it and I wasn't a Wagnerian yet! So we ate another sausage and I had a beer.  At some point we bought (and ate!) a Sacher Torte. We were about ready to leave Vienna and, feeling a bit tired of sausages and beer, we decided to have dinner at some nice Viennese restaurant. I ordered this thing which turned out to be a very large dumpling about the size of a soft ball. It was OK and kind of "interesting," but I couldn't finish it and felt very tired. We took the tram car back to our lodgings and went to bed. In the middle of the night I had the worst nightmare of my life. I won't share the specifics, but it was literally a nightmare in a nightmare in a nightmare. In the dream I jolted awake from a bad nightmare only to find a few minutes later that I was still in the bad dream. I kept trying to wake up and when I finally did actually awaken I was very scared and had trouble accepting that I was really, finally awake - fearful that the dream was still continuing. All I can say is that I was sorry I'd ever seen Rosemary's Baby or eaten that cursed Viennese dumpling.

Eric comforted me; and I eventually got back to sleep. The next morning I awoke with a very bad case of the flu (or possibly severe exhaustion). We were supposed to check out that AM, but I was in no condition to stand up, much less travel on  to Salzburg. Our B&B hostess had already rented our room to another traveler, but she took pity on my sad physical state and she and Eric made a sort of bed for us on the floor of her husband's home-office.

I was very sick. Eric brought me juice and fluids to drink, and to entertain me Eric told me a story that he made up on the spot. It was what became The Giant Garden of Oz. I don't recall how far he got in the story before I got better after a couple days rest.

I felt a good deal better by this point and we took the easy train trip from Vienna to Salzburg.

I loved Salzburg! It was lovely and magical! Eric and I took a long toboggan ride down what looked like a small Alp. We went to see the Marionette Theatre of Salzburg (they did a puppet version of Marriage of Figaro which was slow and dreary). We went to the deep and cavernous salt mines outside the city (I'd never realized that "Salzburg" means "Salt Town"). And . . . we took the Sound of Music tour! And Eric told me more about Dorothy, and the giant vegetables, and Imogene the cow . . .

It was again time to move on and we were both getting very tired. We decided to forego a visit to Berlin and simply return to England for an extra few days in London. I regret this now, as I would have liked to have paid a visit to Berlin before the wall came down. We boarded the train from Salzburg to Oostend, Belgium, so we could take the hovercraft back to England. We went to another few museums, we saw the then-newly restored Lawrence of Arabia, and Eric told me more about Dorothy and Imogene, and the giant vegetables.

Our first Grand Tour of Europe was over! We did all of the above in forty days! We flew back to the United States and a few days later went to the 1989 Winkie Convention. Eric did not finish telling me the story that summer. It kind of came to a halt after the balloon basket slid down the rainbow.

But in 1993 Eric finally finished "my" story. And right there on the dedication page it told me that story was mine! Go buy a copy! 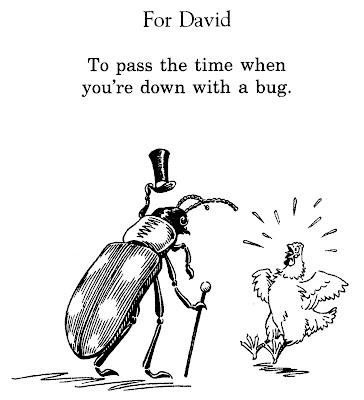 I actually read "Giant Garden" on the Plane coming home from this past 2015 OzCon and it was really good and helpful (because it was really lousy flight, both ways).
And now that I know some backstory behind the book, I have a better appreciation of my copy!

Plus I'll be having my own Euro trip later this year with my parents: London, Paris and most of Italy! So I look forward to that!

Is this new Dover edition with additional illustrations and possible intro/afterwords, or just a new cover?