Now, mapping the Emerald City raises multiple questions. What era Emerald City are we actually mapping?  There seem to be four stages of EC urban design:

1) The Wizard's Emerald City: this is the "gray" version of the city that is only "emerald" because of the green spectacles locked onto people's heads to make everything appear green.

2) The Scarecrow's Emerald City: his hay-stuffed majesty seems to have begun a major renovation, making things truly green and installing many actual emeralds and precious metals, as evidenced by the fact that Jinjur and the Army of Revolt steal said emeralds.

3) Princess Ozma's Emerald City: This is the lovely, palatial version first seen in John R. Neill's illustrations for Dorothy and the Wizard in Oz and much expanded upon in The Road to Oz, where it seems kind of like a green version of San Simeon/Hearst Castle.

4) The Neill books' Emerald City: this version seems to preserve Ozma's palace design, but the houses have literally come to life and there is a distinct new wacky/cute aesthetic.


This fourth version of the city is by far the richest in known detail. But can anyone really imagine the Neill Emerald City when reading a Baum Oz book? I certainly can't, but I do admit having a great fondness for the Neill-era Emerald City design as depicted in his three Oz titles. Perhaps, as I alluded to in a previous post, this comes from having a deep fondness for Sid and Marty Krofft's Pufnstuf and Living Island where everything is alive.

So when I was writing Part One and Part Two of this Emerald City Map series I had been thinking that Neill's Emerald City urban design and aesthetic were limited to his three books. I began thinking how bizarre it would be to imagine Dorothy and her three friends first encountering the Emerald City in Baum's Wonderful Wizard of Oz if they had arrived at Neill's Emerald City. And then it hit me, Dick Martin had done just that in his 1961 picture book abridgement!

Martin's EC has the same zany, cartoonish aesthetic that Neill's does. I had always just imagined this was Dick Martin's version of the Emerald City, but, in fact, I believe it is explicitly Neill's vision that Martin is emulating.

Below, note the cover of Martin's picture book showing the main entrance to the Royal Palace and how closely it matches Neill's double staircase design, massive towers on either side of the entrance, and layered turrets reaching higher and higher.

Well, that's sort of neat, I thought. I wonder if Dick Martin explicitly utilized Neill's architectural and urban design in his other books. And then, duh! I immediately realized that Martin had used Neill's EC design in his Cut and Assemble the Emerald City of Oz (1980) from Dover.

I pulled my copy off the shelf and there is Neill's Emerald City! 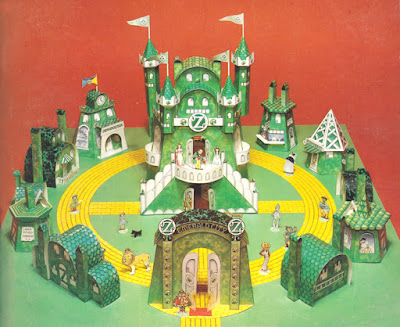 It's simplified, of course, but the above view is virtually the same view we get in the wonderful cityscape Neill drew for The Wonder City of Oz below. The palace stands towering over the city in the middle, the shorter anthropomorphic houses surround the palace on all sides, and the city's circular main street rings itself around the city, broken up by spokes of road to create the city blocks. 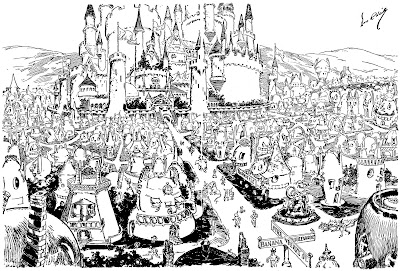 Some of Dick Martin's buildings are very similar in design to Neill's, such as the Ozmapolitan Building below: 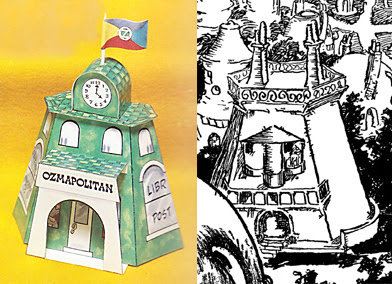 Even more interesting is that Martin provides an additional map of the Emerald City that I had never even considered, though it is, in fact, just his layout suggestion printed in the book.


This truly is Neill's Wonder City of Oz design, Strawberry Street and all! Indeed, Martin pays some homage to Neill in the final paragraph of his instructions:

Many Ozian authorities state that the Emerald City is circular in layout (see the diagram). If you agree, you might make a Yellow Brick Road of yellow construction paper, "paved" to match the sections under the Emerald City Gates. The Road should be about 2" in width, the outer diameter of the circular part being about 18".  This may be mounted on the center of a sheet of green poster board, about 24" square in size. A short length of road, extending from the front edge of poster board, should lead directly to the city gates. Side roads might lead, like the spokes of a wheel, from the palace entrances, as shown in the diagram; as a finishing touch, trees or flower beds could be made to ornament the palace grounds.


Now for a bit of behind-the-scenes info and bibliographical detail. The original printing of Martin's Cut and Assemble the Emerald City of Oz did not contain an actual Yellow Brick Road, but only Martin's instructions above, on how you might make one. But in Spring of 1983 I was in a bookstore, flipping through a copy, and noticed the addition of a new centerfold containing all the pieces needed to make a Yellow Brick Road as described in the instructions above.


I was corresponding with Martin quite a bit in the early 1980s and asked him about the addition. On April 8, 1983, he replied:

Yes, the new printing of the Emerald City cut-out book has an added doublepage spread of Yellow Brick Road. It was quite a surprise to me, as I knew nothing about it until someone pointed it out to me. (Now, there's an example of an editor making changes without informing the illustrator!)


I may have one more part in this discussion of mapping the Emerald City. But it is a bit tangential and I may just plow on to our next more general map of Oz. You'll find out next Monday!

Click here for the next installment of Map of Oz Monday!

I can't help thinking how very much I would *not* like it if my house came alive. That could easily become a Stephen King story ...