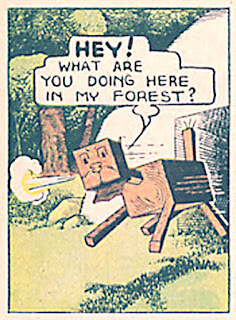 For years Eric Shanower and I have been curious about exactly who Walt Spouse was and what he did with his life. As most Oz folk know, Walt Spouse was the writer artist of the 1932-33 comic strip adaptation of five Baum Oz books: The Land of Oz, Ozma of Oz, The Emerald City of Oz, The Patchwork Girl of Oz, and Tik-Tok-of Oz.

The adaptations of Land, Patchwork Girl, and Tik-Tok were later collected in The Funnies, the early strip-reprint comic book. And Land, Ozma, and Emerald City have been collected into individual trade paperbacks here at Hungry Tiger Press. Click here to check them out!  But Walt Spouse himself has been a complete mystery!

Well, thanks to online genealogy websites, recently released census records, and digitized newspaper archives, I was finally able to track our boy down.

Walter Woolston Spouse was born in Camden, New Jersey, on January 21, 1894, to John James Spouse (b. 1861) and Annie McGrory (b. 1866). Walt was a middle child. The 1900 census lists four older siblings: J. Alfred, older sisters May and Edith, and a brother Charles (just a year older than Walt). Finally, there is a younger brother named Thomas Manley Spouse.

Walt's father had been born in England and his mother had been born in Scotland. They immigrated with their first three children to the U.S. on December 30, 1891. They first settled in Camden, New Jersey, where Charles was born in October 1892, and Walt was born in January 1894. Walter's father was a controversial Baptist minister and union organizer. For a time Walt's father was working in Philadelphia, but by 1899 the family had resettled in Saginaw, Michigan.


Considering how much loving detail was worked into The Wonderland of Oz, I always assumed Walt must have been a Baum/Oz fan. Now I can see he was the perfect age to be one. He was six years old when The Wizard of Oz was published and thus he was probably reading the Oz books as fast as they were being originally published..

By the 1910 census, Walt's father is listed as working for the wireless telegraph. That's the same year, coincidentally, in which Ozma cut Oz off from the big outside world in every way - except, of course, by "wireless."

Not surprisingly, Walt seems to have been drawing all of his life.


And while in high school, Walt won first prize from the Saginaw Art Club for a poster sign advertising the club's free art exhibition, announced below in the March 8, 1910, Saginaw News. Walt was sixteen. He completed only two years of high school.


According to Walt Spouse's World War I draft card (dated 1917) he was short, stout, had brown eyes and dark brown hair. He was now living in Indianapolis, where he was working as a staff artist for the Indiana Daily Times. Note how similarly Spouse printed his name at the top of the card (below) to how he signed his Oz comics (see above). His actual signature at the bottom of the card is very ornate and quite handsome. I love the highly flourished capital S! I'm making an assumption that Spouse himself filled in the bulk of the information on the card.


In May 1924 Walt immigrated to Canada. His immigration application says he is moving to obtain work in advertising and he seems to have a job with an agency, but I can not read the company name on the application. He returned to the U. S. in August 1926. By 1928, Walt's older brother Charlie was living in Toledo, Ohio. And it is perhaps on a visit to his brother that Walt met his future wife, as on November 30, 1929, while in Ohio, Walt married a woman named Adelaide Rader.  Adelaide had been previously married to a Mr. Cassady with whom she had a daughter, Elaine. Mr. Cassady seems to have died.

The 1930 census shows Walt living in Dearborn, Michigan. And it lists Elaine Rader as Walt's step-daughter. Walt listed his occupation as an  "artist" working in "commercial art." So Walt had a young child at home while he was drawing Wonderland of Oz in 1932-1933.

On August 5, 1937, Adelaide filed for divorce from Walt, citing "cruelty and no support." The divorce was granted on June 23, 1938. There are no specifics, but Walt did not contest the divorce. The judge also said "no alimony."

In the 1940 census Walt is living in Detroit as an "artist," working in "advertising." He lived in a rented home that cost $40 a month. In the week prior to the census being taken, Spouse worked a 48 hour week. His total income in 1939 was $2750. The census also shows that Adelaide and Elaine have moved in with the parents of Adelaide's first husband.

Walt's World War II draft registration card says that he is still living in Detroit and he is working for the Ralph L. Woolf Co., and then the information on Walt Spouse comes to an abrupt halt.  I find no more information until Walt's death on May 10, 1975. He was eighty-one. It's too bad no one tracked him down for an interview about The Wonderland of Oz.  I would love to know more about Walt's exposure to Baum and Oz, how he liked working in comics for those few short years, and what else he did with his life.


The Land of Oz

The Emerald City of Oz
Posted by David Maxine at 1:21 PM

Too bad about the "cruelty" allegations.

I've never seen any of the art from Tik-Tok of Oz by him. I'd also never seen these Patchwork Girl ones. Ew...Ojo in red and an orange Woozy?! Guess he went by the pictures and not the text.

In fairness, the color image from PATCHWORK GIRL is from the reprint in THE FUNNIES which was probably colored by a staff artist. Spouse's original publication was in black and white in the daily newspaper.

Ah, that makes sense then!