As I was saying . . . Ruth Plumly Thompson's three hand-drawn maps are very important in exploring the cartography of the Land of Oz and its surroundings. Part I (click here to read) explored the map Thompson sent to Oz fan Henry Blossom in 1938. That map was a tracing of Thompson's own reference map below.


Reports suggest Thompson was marking up this map in the hopes that publisher Reilly & Lee would update the old Oz maps drawn in 1914 to show her Oz countries and locales. She has added in details from the Baum books that had not made it into the 1914 maps as well. Thompson's 1938 tracing (here) is virtually identical to this map, but that map makes it much easier to see the finer details. The only substantial change in the map above is the addition of Red Top Mountain from 1939's Ozoplaning with the Wizard of Oz. The caption in The Baum Bugle where this map was first printed mistakenly suggests that Thompson had inked in the words "Red Ink Mt," but comparing the handwriting, it clearly says "Red Top Mt" and is obviously just an addition to the map by Thompson once Ozoplaning had been written.

Of much more interest is Thompson's hand-corrected revision of the map of the countries surrounding Oz shown below.


The center section of the map is missing. There is some indication that what survives and is shown above is actually a pair of photocopies - possibly made for James E. Haff and Dick Martin when they were developing the Oz Club maps. Anyway, on to the discussion!

One of the most interesting aspects of the map is that Thompson has put so much detail into the map from Baum's non-Oz fantasies. Several locations from Baum's John Dough and the Cherub are newly added. She has marked in the capital of Hiland and Loland, appropriately placing it on the border of the two countries. She added in the "Realm of the Fairy Beavers," and she has added in Phreex and the Island of Romance, though she has called it the Palace of Romance here.  I am fairly certain she is not adding in the location from Jack Snow's Magical Mimics in Oz.

Sadly she is working off the flawed map where Hiland and Loland are not drawn as the island they are supposed to be. Phreex should be its own island - not a locale between Hiland and Merryland. That said, she has created a "coastline" for the Mifkets and placed "Castle Isle" offshore a ways. Is this the Duke of Dork's Castle Boat - or some place from John Dough I'm forgetting? She has also added her "Castle Boat" in the Nonestic Ocean proper in the upper right hand corner of the map.

Thompson also added in lots of detail from Baum's Dot and Tot in Merryland, or at least close approximations: Clown's Country, Valley of Dolls, Valley of Lost Things, Pussy Cat Valley, and Babyland. And she has even seemingly inked in the Merryland River! Was she working from memory? If she was actually going through the books why garble the names of the valleys? She also failed to add any detail to Noland or Ix. Perhaps she never read Queen Zixi of Ix? She did add Mo to the map, but has misspelled it "Moe."

There are lots of other bits added to the map, such as Bobo's Castle. Oddly she has added both the Mangaboos AND the Glass City to the Vegetable Kingdom when in fact they are the same place.

One of the things I find most interesting is how she has added in many of her islands to the small section of the Nonestic Ocean that we can see on the map. On the image above it is very gloppy and suffers from bad reproduction. I took a few minutes and cleaned up that section of the map and relabeled the islands: 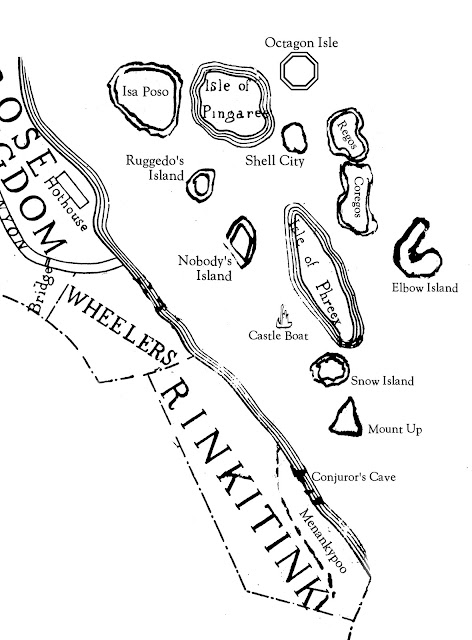 Yowza! What a crowded little bit of ocean this has become! Obviously Thompson was only imagining Reilly & Lee modifying the existing maps - not expanding them to show enough ocean for the islands to be placed realistically. And of course even this little triangle of ocean wouldn't be QUITE so crowded if the Isle of Phreex were over on the other side of the continent as it should be (near Hiland and Loland) where Thompson tried to re-position it. Oddly she didn't remove it from the clutter-fest above.

Now, of course we can't take the scale and positioning of these islands as utterly sacrosanct - but somehow I find it sort of charming Thompson was jamming in her many, many islands (several books worth!) into this sad little triangle of visible ocean. Note Thompson has also added in Regos and Coregos from Baum's Rinkitink in Oz. She has also taken a chunk of Rinkitink real-estate to form Menankypoo and marked in the Conjurer's Cave.

As I've mentioned before, I am hoping that this blog series will eventually lead to a new set of Oz maps that accurately reflect the text, while preserving all the detail possible that was provided by the original authors. Thus while Elbow Island can't possibly be that close to Regos and Coregos, when the new Nonestic charts are drawn I hope to utilize Thompson's hand-drawn shape of the island as shown above. Some day . . .

Next time we will begin a several part look at the mapping of the Emerald City! Click here for the next Oz map blog post.

I really missed to this series (and the entire blog) and it's great to see it back on the map! (no pun intended).