It is always fun to finally acquire a super rarity for one's Oz collection! One can look forward to sharing the new treasure, gloating a bit, and relishing the looks of Ozian envy in the eyes of one's Ozzy friends. Or maybe not. 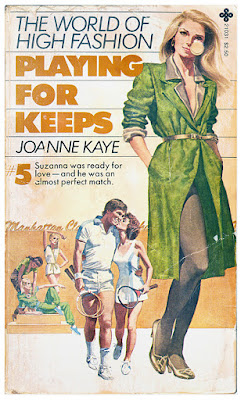 The most recent addition here in the Tiger Den is a mass market paperback called Playing for Keeps by Joanne Kaye and published in 1982 by Playboy Press.

My more cultured readers probably know why this book belongs in every Oz collection. It was, in fact, written by Rachel Cosgrove Payes, author of Hidden Valley of Oz and The Wicked Witch of Oz.

Rachel wrote well over forty other books: mysteries, "career" novels, and many romance novels. She published under multiple variants of her name: Rachel Cosgrove, Rachel C. Payes, and a half dozen science fiction novels under the name E. L. Arch (an anagram of Rachel).

This is the only Joanne Kaye book that Rachel wrote. I have no idea who wrote the others, but Rachel explicitly stated that this was her only Joanne Kaye novel, though the book is #5 in a series of at least six. Kaye does not seem to be a real person, but is instead a "house name" for Playboy Press. All six books are set in "The World of High Fashion," and from the ads in the back of the book I suspect they all revolve around the main character, Suzanna Blake.

OK, you ask, why did I play up the "rarity" angle in my opening lines. Well, between my collection and my BF Eric's collection we have almost every book Rachel ever wrote. We were good friends of Rachel and her husband Norman for the last ten years of her life. And I had know her casually since we began corresponding in 1980. While Rachel was still alive (she died in 1998) the only books of hers that were relatively easy to obtain were her romance novels - particularly the "bodice ripper" historical romances that she wrote in the last two decades of her life. 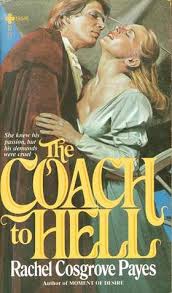 As much as I adored Rachel, I could not make myself wade thru such books as The Coach to Hell, and Satan's Mistress. But not long after she died it became much easier to track down her early mystery novels and science fiction via the internet. Eric and I began to snap the various titles up. They were fun, often attractive, if old-fashioned, hardcovers with quaint dust jackets. And I found that I quite enjoyed these books, as they were often loaded with little chunks of biographical detail from Rachel's own life and interests.

Well, this Playing for Keeps book just wasn't turning up. From what I can tell there has not been a single copy on eBay, Amazon, or any of the on-line book sites during the decade I've been looking. I had begun to think that maybe the book had never been published, or the name had been changed and no one told Rachel. But a few weeks ago a copy finally turned up - in Australia! The book was quite inexpensive, but the shipping charge was huge. Obviously, I bought it.

Playing for Keeps is a contemporary novel about the "World of High Fashion." The protagonist, Suzanna Blake, is an important New York fashion designer. She and Elaine Roberts, the owner of a fashion house, decide they should launch a new line of sports clothing and they need a hot young female athlete to "sponsor" the line. They focus on signing sixteen-year-old Ginny Norris, who is dating another male tennis star. There's a good deal of action involving one of the other female tennis pros, Trish Crawford, who is generally known to be gay. Thankfully Trish is one of the good guys in the story. Indeed, the villain is a vile and very homophobic columnist who is out to destroy a couple of the characters.

The book turned out to be rather interesting. Not for its plot, characters, or writing style, but because it is jam-packed with very graphic sex scenes! Pulsing, muscle-clenching, flesh-moistening, anatomically-described sex scenes written by Oz book author Rachel Cosgrove!


The protagonist sleeps with the journalist she has enlisted to introduce her to the tennis world; Elaine Roberts goes to bed with a friendly competitor; Elaine goes to bed with her friendly investor in the new sports line who has mob ties; Suzanna goes to bed with the sports journalist again; Ginny and Mark go at it with some heavy flirting which nearly turns into rape; and Ginny's step-father actually rapes both Ginny and Suzanna. There is even a graphic lesbian sex scene in which the young Ginny Norris is bedded by Trish Crawford. The next morning, Ginny is a little freaked out and goes to talk to Suzanna Blake to try and make sense of what she's done. Ginny eventually says: "What we did last night isn't natural."

Suzanna closed her eyes, thinking, Give me strength! This girl would be the death of her yet.

"Ginny, There are many different kinds of sexual love. I know that homosexuality has been a no-no in our Western society. Churches have said it was sinful. But there are places in the world, different cultures throughout history, where it has been accepted as normal. Different from some, but still just a variation. Don't feel soiled by what happened between you and Trish."


The nasty homophobic columnist has been spying and decides she can use the lesbian encounter to destroy Ginny's career. But Suzanna and her friends trick the columnist into showing up at Le Monocle, a lesbian bar in Paris, promising to give her the "proof" she needs to go public with her lesbian accusations. But instead the good guys drug the homophobic columnist, and take a series of nude photographs of her engaging in lesbian sex herself. And with the photos they blackmail the columnist into silence and forbid her to ever write anything anti-gay in her column in the future. Hooray! A happy ending!

There is a lot of very specific detail in the book about places in New York City, restaurants, clubs (they go to Michael's Pub one night and find Woody Allen jamming in a session), and there are lots of lovingly described meals and drinks in actual restaurants in both NYC and Paris. In the Paris chunk of the book, Rachel accurately describes streets, locations, hotels - and even stages the downfall of the homophobic columnist in Le Monocle, a historic Lesbian bar in Paris.


I was curious if Rachel and her husband Norman enjoyed night-life or fine dining in New York, or if Rachel had been to Paris and written any of the Parisian locations from memory. I asked Rachel's son Robert and he replied:

I don't recall if the folks ever visited Paree; if they did, it was after my sister and I were in college. They DEFINITELY were not into fine dining, in NYC or elsewhere. (The only exception is when the Nebula Awards banquet was held in the Apple...) I would hazard a guess it was all research.  Trust me, if I'd known they were going to Paris at any point, I would've asked them to bring me home a cancan dancer!


While the food and geography seem well described, the descriptions of the various fashions leave a lot to be desired. Rachel always insisted she was "a verbal, not a visual" person. The combination of colors and fabrics seems garish and generally just tossed off by Rachel. Would a clothing designer really design a pair of sable fur tennis shorts? There's an amusing scene when Ginny laughs at them and points out how ridiculous it would be to play in a fur tennis outfit: "But Suzanna, who can play tennis in fur bloomers? I'd get so hot I'd probably faint." Suzanna replies: "Wait until my sample maker does the originals in suede and fur, satin and leather. The tennis world may never be the same again!"

And that, my readers, is the tale of Playing for Keeps. Isn't it curious where the yellow brick road can lead a person?
Posted by David Maxine at 4:20 PM