In the late 1950s, Oz and Baum scholar Robert R. Pattrick began his own endeavor to map the capitol of America's fairyland. He had published a four part article on Oz geography in The Baum Bugle in 1959 and '60 when he died rather suddenly on August 17, 1960, at the age of thirty-three.


After Pattrick's death, his notes and maps were shared with fellow Oz scholar Judy Pike who picked up where Pattrick left off. Pike published their research in the Spring 1972 issue of The Baum Bugle. It is the Pike/Pattrick map we will be discussing below.


Before we begin analyzing this map I should point out that Judy Pike has flipped Neill's partial map to make it  match directions and orientation with the Oz Club maps (which we haven't discussed yet). Apparently, Pattrick had used the Neill/Thompson "Munchkins on the left and in the west" orientation. I don't know if Pattrick actually preferred the Neill/Thompson orientation, but it makes sense that he would have used it while researching this map and working his way through Neill's books looking for details in the text.

I do think this concentric beltway/spokes design is very appealing. The map above shows only the major streets. Each of the sixteen "segments" or "blocks" in the map is actually interlaced with winding and twisting streets.

Pattrick and Pike also went through the Baum and Thompson books and attempted to work in every textual detail they could find into Neill's EC design.

This map shows four gates to the Emerald City, one facing each of the four countries of Oz, as established by Baum in The Patchwork Girl of Oz on page 184. The map also shows: Unk Nunkie's cottage just outside the Munchkin gate;  the location of Notta Bit More's circus tent in the far suburbs; the public square (where Ozma's Road to Oz birthday festivities took place) is on the south side of the palace. The Love Magnet is hanging above the South Gate, and Pike has added in many textual locations from the Neill Oz books. 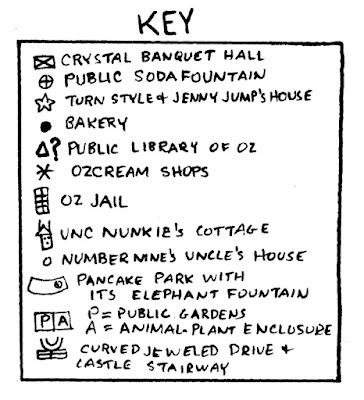 Judy Pike seems to have gotten confused about Jack Pumpkinhead's "Pumpkin Park." She has moved it from its textually explicit location north of the Emerald City and repositioned it to the west having drawn in a wedge of Winkie Country to accommodate it. I suspect Pike believed she was restoring Jack's gigantic hollowed-out pumpkin home to its proper Winkie location. But, in fact, Jack's "Pumpkin Park" location is his "second" home where he stays in the old Ozoplane when he wants to be closer to the Emerald City.

One problem I have with this map and this research is that Pike is not clear about what detail is explicitly based on textual evidence and what detail Robert R. Pattrick seems to have invented.

"Pattrick discovered that four main streets in the city connect the four gates to the palace. They are Celery Street (Winkie Gate), Custard Court (Quadling Gate), Pumpkin Place (Munchkin Gate), and Strawberry Street (Gillikin Gate). Each, as researched by Pattrick in the Neill books, has certain extensions into the countryside, and these extensions are noted on my map."


Personally I'd like the references. From my admittedly hasty look through the Neill books I can not find that all four streets are named and that all four road extensions are named. It's possible I missed them. It is also possible that those details are in Neill's original manuscript for The Wonder City of Oz (the published book is heavily rewritten by a staff writer) or possibly from Neill's original manuscript for The Runaway in Oz, both of which Pattrick had access to. Anyway, I haven't had time to plow through the three books and two manuscripts. If any of my readers want to post text references in the comments section of this post I'd be delighted!

Pike does imply later that all these streets are mentioned in the text as she deliberately leaves off a few names Pattrick did invent, such as calling the road he adds around the palace Tangerine Terrace.

Pike's article is generally very solid and she has worked meticulously through Neill's books to place some of the locations such as Pancake Park:

"Although Pattrick always located this park on his maps between Strawberry Street and Doughnut Drive, he enlarged and shrank it in his various map versions. He was trying, I think, to reconcile some of the facts given in the Neill books, primarily the statement that as Sir Hokus comes into the city from Pumpkin Park, he takes a shortcut through Pancake Park to the Castle. In addition, I found that one must be able to look down Pudding Place and see the park, and that, when within the park boundaries, he should be able to see the sun rise. As I've placed Pumpkin Park in the West, Sir Hokus would enter on Celery Street. By locating Pancake Park straddling Celery Street and Pudding Place and fairly close to the walls of the Castle, one may reconcile the facts into an acceptable location. In spite of the high Castle Wall, the sun's rays at daybreak might well reach into the park at the Pudding Place boundary."


I will try to add a PDF version of the full article when I have a few minutes. It's very detailed and quite good.

It's so not fair that Robert Pattrick (and likewise, Rob MacVeigh) died so soon, I would really like to have their Oz works continue and be completed.

Still, it's interesting what happened here with the Oz Map and Emerald City geography.

This is so awesome. I never knew such a thing existed and I'd always wanted a map of the EC! It's a bit off from what I'd pictured, but still the best thing we have I suppose. I'm not a big fan of the food names...gemstones, colors or something would have been preferable for me. Though since Neill also said the houses were alive, maybe the names were made up as well.

I always wondered about Pumpkin Park myself. It fits better with the text of the Neill books for it to be in the Emerald City limits, but did he just forget about Jack's pumpkin patch? Also, doesn't the version of "Runaway" that Eric edited refer to the patch as Pumpkin Park?

I'm pretty sure Neill did mention all those street names, but didn't give locations for most of them. As for why they're all named after food, maybe the person in charge of naming them did so right before his lunch break. Actually, I believe an early Ozmapolitan referred to a Scarecrow Court, so that's a pre-Neill reference to a non-food-related street name.

One odd reference is in "Ojo," in which Unc Nunkie walks from his own garden through "a small door leading directly into the royal park of Ozma's castle." Unless the door has magical properties, wouldn't he have to walk through part of the city after entering through the wall?

Well, as I mentioned above, Pumpkin PArk is just Jack's second home in the Ozoplane - it is not the giant pumpkin house. Seems to me Jack just has two homes - his city place and country place . . . so to speak.

I can find many of those street names, but not all in the Neill texts. I think Pattrick and Pike made a few up.

And yes, the door Nunkie uses in OJO can't easily work the way it is described in the text.It seems to me both Neill and Thompson often got confused over the fact that there are TWO Emerald City walls - the one around the whole city and the one around the palace. But if one nwated to try a literalist approach to this small problem in OJO once could have a portion of Ozma's gardens extend to the outer wall, a sort of city park.

I found all of the street names in Neill, although the mentions of Custard Court in SCALAWAGONS suggest that it isn't a full street. It also says Strawberry and Celery Streets are "short-cuts to the Court," which wouldn't be the case on the Pattrick/Pike map.

OZOPLANING gives the impression that the Guardian of the Gates is at the castle wall rather than the city one when the Stratovanians arrive, but it's not entirely clear.