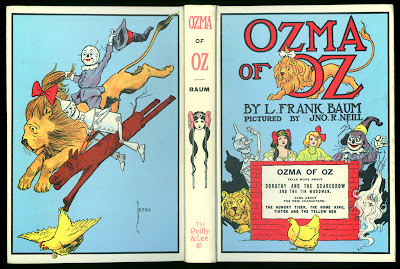 Last week we looked at The Land of Oz - so today we come to the "white edition" of Ozma of Oz. Dick Martin's changes to the interior of Ozma were minimal and most of our discussion today will center on the cover design.

If you downloaded the Ozmapolitan last week (and you were very observant) you might have noticed that the covers for The Land of Oz and Ozma of Oz on the final page of the Ozmapolitan do not quite match the published books; they seem to be mock-ups. This may indicate that Land and Ozma were the last of the 1964 releases to be designed.

The Land of Oz mock-up is quite different, while the Ozma mock-up seems  essentially the same. It looks like Dick Martin simply took a stat of the old 1920s cover label and stuck it on a 1950s edition of Ozma (note the semi-script Reilly & Lee imprint on the spine).

This cover label with the crowd of Oz characters peering around a short brick wall was first used as the original dust-jacket design in 1907. It became the first pictorial cover label for Ozma around 1918 or '19 and remained in use until it was replaced by the so-called "slinky Ozma" cover in 1929.

As you can see, if you compare images, Dick Martin completely redrew the image; he also added cast shadows to create more light and dark dynamics for the new cover. And of course, the colors are new. The spine is a slightly redrawn version of the original spine illustration.

For the back cover Dick utilized a section of the original pictorial end papers, redrawn to eliminate the background, and rotated slightly.


This back cover design brings us to an unusual bit of Oz merchandising. The back covers of the "white editions" of Wizard, Ozma, and Glinda were issued as posters by the Ozco Poster Company of Beverly Hills. I have no idea why they selected only these three images or who they were.


The posters measure 20" x 28.5". The posters from Wizard and Ozma are dated 1967, but the Glinda poster is dated 1969. The dates indicate that they were sold separately, yet my three came as a set in a plastic sleeve with a small label saying Ozco Posters, featuring an illustration of the Tin Woodman. These are the only three designs to be made into posters as far as I know - I asked Dick about them in the early 1980s and he said these were the only three, also.

The interior of the "white edition" of Ozma is little changed from the then-current Reilly & Lee edition. A new page one has been added showing the text ad for "The Famous Oz books," for which Dick has used the illustration of the Scarecrow and Billina from the verso of the "List of Chapters." On the backside of this new page is the usual listing of the Oz books. The earliest copies no doubt list all forty titles while later ones cut the list to Baum's fourteen. On the verso of the ownership page Dick has created a new illustration adapting the drawing of Tik-Tok and a Wheeler from the original endpaper design. 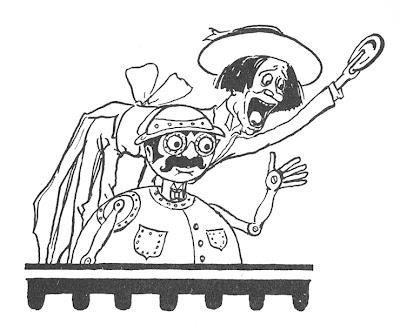 Dick did some repair work to the "List of Chapters" illustration (see below). When the color was eliminated from the illustrations in the 1930s, Ozma's long sleeves (originally printed in blue) disappeared creating some nonsensical holes in the illustration. Dick redrew them.

On the verso of this page Dick created a new illustration of the Cowardly Lion, Hungry Tiger, and Billina looking thru an Oz logo to replace the image of the Scarecrow and Billina he moved to the ad of page one. This new image was adapted from the 1907 back cover design. 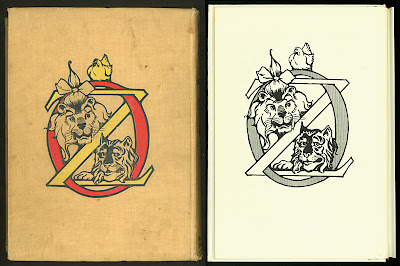 So that's it for our blog on the "white edition" of Ozma of Oz. We'll close with the handsome bookmark below, prepared to publicize the new "white editions." Next week we'll explore Dorothy and the Wizard in Oz!

My second copy of Ozma of Oz must have been either a Rand McNally or Scholastic paperback that used the same cover design and interior as the white editions. I've missed that cover...

It was also the first Oz book I ever owned with John R. Neill artwork in it. I wondered what on earth was up with Dorothy because I was so used to MGM and Evelyn Copelman.

I have an old Scholastic paperback edition of OZMA and it uses the same front and back covers as the white edition. Alas no endpapers but the rest seems the same.

So THAT explains why I saw an entirely different cover for "Ozma" (with the friends around the brick wall) only that one time online and never again!

The Scholastic paperback does indeed use this cover design bu inside the text is completely reset and it contains only some of Neill's illustrations, and almost all the forematter is missing.

This Scholastic OZMA is also a bit unusual as it "corrects" all of Dorothy's baby-talk contractions.

From the copy I have, I can verify that this edition did exist with the full list of all forty Oz titles.

But, oddly enough, the paper my copy is printed on is rougher and thinner than I remember the white editions being.

Did you ever find out more about the Ozco Poster Company and those three posters? My library has been given a copy of the set and I was looking for information and found your blog post. It would be nice to have more information for when they are catalogued.