Today, December 11, 2011, would have been Rachel Cosgrove Payes's 89th birthday.

In the summer of 1979 I finally obtained a copy of her first book The Hidden Valley of Oz (not a first edition) and after reading it I wanted to write Rachel Cosgrove and get my book signed. I wrote Fred Meyer, then secretary of the Oz Club, for her address, but he warned me she'd probably not answer as she hated Oz and hated Oz fans. But he sent me her address and I decided to try my luck.

I got an immediate reply from Rachel and she couldn't have been more charming. She even doodled little pictures of her characters Percy and Spots from Hidden Valley at the bottom of the letter. She happily agreed to autograph my book and signed the letter "Oz forever!"

It turns out she didn't dislike Oz or dislike Oz fans - she disliked Fred Meyer. When the Oz Club was founded in the late 1950s Fred had written to Rachel asking if she'd like to join. She politely declined for various reasons, including having two young children to raise. But Fred kept badgering her - and he really kept badgering her to send him a copy of her then-unpublished second Oz book, The Wicked Witch of Oz. She finally had to read him the riot act - asking him to leave her alone - something that I'm sure she could do quite well! And Fred wrote her off as an Oz hater.

Now, Rachel did indeed have a problem understanding grown men devoting their lives to Oz. She repeatedly said, "Oz is for kids." Rachel also had great trouble comprehending what she called "the collector mentality." But to some extent these were just sound bytes Rachel would toss out. Anyone who makes herself a Wicked Witch of the South costume (pointy hat included) and delights in showing off her silver high heels (as silver slippers) must have a big streak of Ozzy fandom running through her veins.

So back to that first letter from 1979. I sent Rachel my copy of Hidden Valley and she signed it. We struck up a pen-pal sort of correspondence, exchanging a couple letters a year and birthday and Christmas cards. In early 1985 I was going to be in New York State and I wrote and asked if I might pay her a visit. She said she'd be delighted. Rachel was living in Shrub Oak, New York, about half an hour north of NYC. She welcomed me in, we talked for a bit, she showed me the shelves that held copies of all of her books (almost forty titles at that time), and we also looked at her research library which she used in writing the gothic romance novels she wrote in her latter years.


The most surprising thing about the visit was finding Rachel had a bad foot. She had fought a serious battle with cancer a couple decades before, and the experimental chemo that saved her life dissolved some bones in her foot. She got around fine, and her foot never stopped her from doing extensive world travel or going dancing with her husband Norman. I had acquired a first edition of Hidden Valley by this time and I brought it along, hoping she would sign it. She happily agreed to do so. 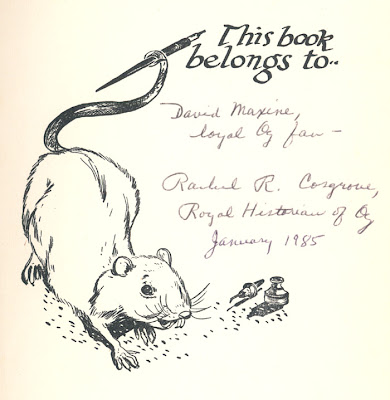 We continued to exchange notes on occasion - especially after I started attending NYU. But in the summer of 1990 our relationship kicked into higher gear. Eric Shanower and I had just started living together and suddenly Eric was asked by the Oz Club to illustrate Rachel's Wicked Witch of Oz. The Oz Club had just gotten the rights to reprint Hidden Valley of Oz, too. Rachel decided to attend the Munchkin Convention that year and her Ozzy renaissance began. She and Eric wrote back and forth quite a bit while he was illustrating the book, Rachel became a regular at the Munchkin Convention, and in 1994 I asked her to write something Ozzy for the first issue of my forthcoming anthology Oz-story. A few months later a long short story arrived in the mail, "Percy and the Shrinking Violet."


She wrote me another story, "Spots in Oz," for Oz-story No. 3. She and Norman had become good friends. Eric and I held publication parties for each issue of Oz-story and Rachel and Norman always came. Rachel often brought little hand-made gifts and bottles of wine, she baked Hidden Valley muffins for us, she went to a lot of trouble to track down a refrigerator magnet set she thought Eric and I needed - it was a Michelangelo Statue of David magnet complete with removable Santa suit! It's on our current refrigerator still. Every few weeks Eric and I would get a letter (sometimes addressed to our dog) and Rachel would have scribbled some complaint about writing, clipped a cartoon, and thrown in some coupons for something she thought we might need. Rachel was no longer the Royal Historian of Oz - she'd just become a good friend.

Happy Birthday, Rachel.
Posted by David Maxine at 1:43 AM

She sounds like she was an amazing lady.
You were blessed to know someone like that.
She's not the first person I've heard of who didn't care for Mr. Meyer, though I have one friend who thought the world of him since he shipped her free Oz books all the way to the other side of the world.

She seems like such a sweet woman in those pictures, thank you for sharing this story!

One day I'll track down an affordable copy of WW of Oz.
Let us all know on your blog if it ever gets printed again!

Good morning. This is Robert Payes, Rachel's firstborn and, like her, something of a writer. In hindsight, it would have been hard NOT to be, growing up in a household that was not only full of books, but also typewriters, carbon paper, and White-Out -- as well as a TV policy that could be summed up as "You'll watch PBS or you won't watch, period." :) As a result, I had my first (science-fiction) short stories while in high school, joined the SFWA shortly after (and got to rub shoulders with the likes of Heinlein, Asimov and Ellison at Nebula dinners), then went on to review music and interview musicians for my college newspaper and TROUSER PRESS magazine. While my current interests (photography, video) are more visual than verbal, I will always be grateful to Mom for instilling in me both a love for the written word and an outlet for my creativity. Miss her much.

Thanks for sharing this story, David. A very nice memory of Rachel, and a fairly humorous anecdote about our beloved Fred!

I remember someone claiming to be related to RCP messaged me on YouTube, asking if I had "Oz: The American Fairyland," because she appeared in it. It spurred me to get a copy and do a video transfer. Never heard back from them. ... Well, that was worth it.

RCPayes was my grandmother's 1st cousin. I was very happy to find this nice write up about her. thank you.