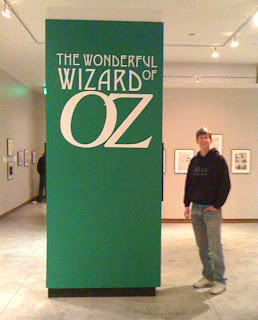 A few weekends ago Eric Shanower and I paid a visit to the Cartoon Art Museum in San Francisco to see a wonderful  exhibit of Oz comics including lots of Eric's original artwork as well as many pieces by Skottie Young.

There's lots of cool stuff to see - I'm also pleased to say I loaned them a page of Skottie Young art from my collection, too. One of my favorite things in the exhibition was the Denslow Father Goose comic page and also the several Neill Nip and Tuck comic pages. All the original Shanower art is great - but since it usually resides here in the Tiger Den it doesn't seem as special to me as it might to others - though I do like seeing it all matted and framed and hanging on the wall.

We’re off to see the Wizard! The Cartoon Art Museum celebrates The Wonderful Wizard of Oz with an exhibition featuring vintage newspaper tearsheets and original artwork spanning over 100 years of classic comics.

At the dawn of the 20th century,  L. Frank Baum created a world of wonders that was to hold a permanent place in the culture of America: The Wonderful Wizard of Oz . Then in 1904, to promote his second book, Baum, along with master cartoonist Walt McDougall, brought his famed characters to Earth in a new medium, the comic strip. Famed Oz illustrators W.W. Denslow and John R. Neill also launched their own syndicated comic strips in the early 20th Century. The Cartoon Art Museum’s exhibition will include a selection of tearsheets from these talented artists: McDougall’s Queer Visitors from Marvelous Land of Oz, Denslow’s Father Goose and Billy Bounce, and Neill’s Nip and Tuck, courtesy of historian and publisher Peter Maresca of Sunday Press.

Acclaimed writer and artist Eric Shanower’s first Oz comic, The Enchanted Apples of Oz, was published in 1986, beginning his 25-year (and counting!) association with Baum’s characters.  This exhibition will feature highlights from five of Shanower’s Oz graphic novels, as well as a selection of art from his latest series of Eisner Award-winning Oz adaptations for Marvel Comics illustrated by Skottie Young.  Additional collaborators include Anna-Maria Cool and the legendary Ramona Fradon.

Presentations and booksignings featuring publisher Peter Maresca and writer/artist Eric Shanower are in the planning stages. Information on these and other Oz-related events will be available soon.