Who Stole the Sexing Stones? 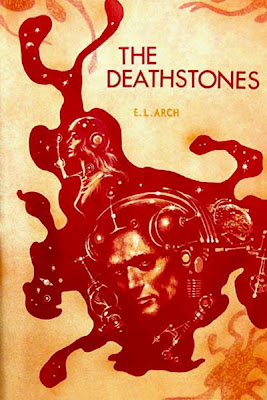 I just finished reading Rachel Cosgrove's SF novel The Deathstones, published by Avalon Books in 1964. As with all of Rachel's SF for Avalon, the book was published under her pseudonym E. L. Arch. Most of my readers know that Rachel Cosgrove was the fifth Royal Historian of Oz, author of The Hidden Valley of Oz and The Wicked Witch of Oz. I've kind of gotten onto a Cosgrove kick lately. I had to dig thru my Cosgroviana a few weeks ago to find a checklist of Rachel's work for a friend who's been bit by the research bug. I wish him lots of luck and much fun!

But as I was saying, I just finished reading The Deathstones. The novel begins on the planet Isis in the Ranian system. Captain Jack Landers is looking for a crew for his small spaceship, the Motley. He and his first-mate hire three peculiar aliens to crew the ship, and yes, Rachel makes a joke about the Motley Crew several times. The three aliens are called X, Y, and Z.

X is the most interesting. He's a protoplasm blob sort of like Odo from Deep Space Nine, except that X can't take other forms. X is a native of the planet Isis. The species is quite intelligent, but can't communicate directly with humans. They can, however, absorb information or instructions if they are in direct physical contact with the person thinking said information. These Ranians (the blobs) have no gender until they make a pilgrimage to the Temple of the Sexing Stones. They enter the temple as grey blobs and leave as either bright red or deep violet blobs who must then mingle with a blob of the opposite color.

Well, Captain Landers is hired by six humans to take them to Osiris (the most distant planet in the system). The bulk of the novel plays out on the crowded little spaceship. The passengers consist of five men and one woman; Captain Landers is none too pleased to have a woman on board. His attitude is very misogynistic, as are the attitudes of the other male passengers. Oddly, the woman is in fact kind of awful. I kept hoping Rachel would redeem her or address the sexist attitudes of the men, but she did not. At one point Amanda says, "I'm such a dope about mechanical things . . . I need a man around to help me." She's simpering, ditzy, and manipulative. Within a few chapters someone has killed her and the book plays out as a murder mystery.

But wait, there's a subplot! Halfway through the journey they hear over the news service that Isis is in chaos - the Sexing Stones have been stolen! Without them the gray blobs will never discover their genders, won't be able to "intermingle" with the opposite color, and there will be no more baby blobs. But in the end the Sexing Stones are found, the murderer gets what he deserves, and all ends as it should with a little help from the Deathstones.

The book was a quick and pleasant read. The grumpy pessimistic captain, the small crew, the half-dozen passengers with secrets (one of whom is a preacher), tooling around a single solar system at sub-light speed definitely reminded me of Joss Whedon's Firefly.

I got my copy of the book many years ago, but never sat down to read it. I wish I had so I could have discussed a few things with Rachel, such as Amanda's character, which seems so odd coming from the strong, well-educated woman Rachel was. I did ask Rachel to sign my copy of The Deathstones, and I was very pleased with what she wrote. I do miss her friendship. 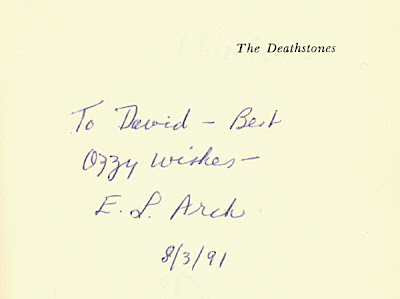 You can read about E. L. Arch's Bridge to Yesterday by clicking here.
Posted by David Maxine at 1:57 AM

Some women are like that and many men are misogynistic. I think even the best of us have some sort of sexism in our nature that we may be unaware of.
Maybe that was just the kind of people those characters were.

I may have to search for a copy of this book though so I can form my own opinions.

Thanks for sharing Mr. Maxine, I always appreciate finding out about "new" books from the Oz authors!