It Gets Ozzier - FRIEND OF DOROTHY 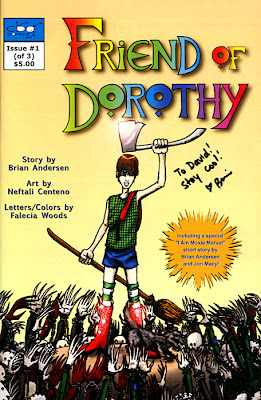 There are so many cool Oz comics being published! Today we take a look at the first issue of Friend of Dorothy, a three issue limited-series from writer Brian Anderson with art by Neftali Centeno.

The sepia-tinted story begins when a teenage gay boy named Scott-John attempts suicide.The reasons aren't explicitly stated, but Scott-John seems to be in a funk over another boy, and possibly he's having issues with his parents over being gay. He is saved from death by a male version of Glinda the Good, named Gorlindo. The story bursts into full color, and no sooner is Scott-John presented with a pair of knee-high Ruby Slipper-boots than he is attacked by a group of homophobic scarecrow monsters! Gorlindo also gives the boy a flying broom and he and Dodo (Toto's great-great-grandson) convince Scott-John to set off on an adventure of Ozzy self-discovery.

Friend of Dorothy has a freshness and vitality I hadn't expected. The characters have some complexity, too. I found myself liking both Scott-John and Dodo quite a bit. This is due mainly to Brian Anderson's writing. At first glance I didn't like Centeno's artwork much, but after reading the first issue it has grown on me. It's best in the most straightforward parts of the story, like in the scene below, where Dodo is teaching Scott-John how to fly the broomstick.The more action-filled scenes don't work quite as well for me. 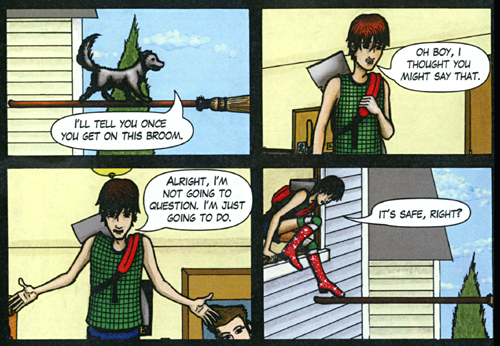 You can view a digital preview of the first eight pages of issue #1 of Friend of Dorothy by clicking here.

If you like Oz and comics, you should consider joining us at this summer's west coast  Oz convention where we will be celebrating several Oz related comics. Our guests will include Eric Shanower (Marvel's Oz series and Adventures in Oz), Tommy Kovac (writer of Royal Historian of Oz), and Kirk Kushin (writer of Ozopolis). Check it out here!
Posted by David Maxine at 5:16 PM