He's the Wiz and He Lives in Oz!

A few years ago I happened to be in New York City on the day that Footlight Records, the celebrated musical theatre and cast album store, was going out of business. I bought quite a few CDs, but just as I was leaving I noticed, very high on the walls above the emptying CD shelves, the store had marked lots of old display and poster material for sale. In the very back corner was a poster advertising the release of the original cast recording of The Wiz. Since The Wiz is one of my obsessions, I quickly paid the $25 dollars they were asking and then groaned to wonder how I was going to ever get it back to San Diego. It was over four feet wide!


This is it! You'll have to click on the image to get a really good look. I initially wanted it because it was a Wiz poster - and indeed a Wiz image - that I had not seen before. Then I noticed that it said: Soon to be recorded on Atlantic Records and Tapes. Wow! This poster predated the release of the album! Then I looked even closer and realized that what I had just bought was actually original art! 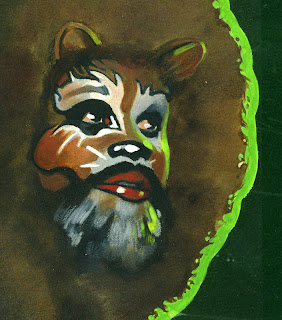 The four figures are all painted in acrylics and colored pencils, fine-tuned with an airbrush. See the detail of the Lion at right. The outlines and green lettering are done in acrylics. The white display type was done in white dry-transfer lettering - some of which is wearing off. It's really amazing that someone went to so much work for this one-off poster! Ahh . . . the days before Photoshop!

It was meant for display - it is on heavy illustration board mounted to another piece of very heavy cardboard with hooks on the back. The edges are neatly sealed in black tape.

Perhaps it was created to hang in the theatre lobby or at Tower Records to advertise the forthcoming release of the album? In any case, it eventually made its way to Footlight Records, and from 1975 until 2006 it lived in the bowels of the record shop collecting dust. Now it is mine!
Posted by David Maxine at 6:00 AM

You didn't tell us how you got it back to San Diego.

Well, I left out the fact that it was drizzling the day I bought it and had to wrap it in trash bags just to get it back uptown where I was staying.

I then left it in my friend Edward Einhorn's apartment for a year or so until I finally found a way to package it up and ship it home by Fed Ex it exceeded Post Office dimensions.

Um, WHO shipped it home by FedEx? Ahem.

Where do you store something that big?