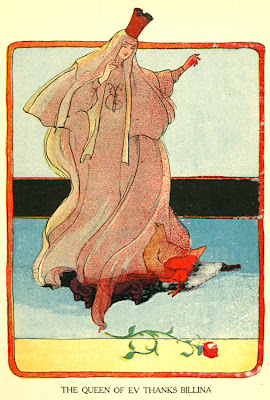 We're taking a break from foreign editions in this Saturday's Ozma of Oz blog series. Instead we take a look at one particular illustration by John R. Neill for the original 1907 edition of the book.

This full page illustration on page 221 features the Queen of Ev, who has just been disenchanted by Billina. When I was a kid I always thought the Queen of Ev looked too much like a nun! Anyway, this illustration was only printed in color in the very earliest copies of the first printing in 1907. It is in black and white in all later copies.

The reason the publishers dropped the color is quite evident if one looks closely at the color version. Something has gone very wrong in the magenta and yellow printing plates resulting in a heavy ink build up along the hem of the queen's gown and the lower half of Billina, which results in so much ink that there is a bad paper scuff (right behind Billina) from overly sticky globbed-up ink. It was so bad that the printed pages stuck together as they were coming off the press - that scuff ripped a chunk of text from page 222, the verso of this page (see below).


The bright vermilion border of the illustration is the same color as the ink blob. The border is also badly overprinted with sticky ink - so much so that one can feel its dimension, the ink is so thick. It looks like the problem arose when the printer failed to remove the dot-pattern of the Queen's gown from Billina - thus making Billina look transparent.What caused the main bright red ink blob is unclear. The printing plates must have been so damaged that they were beyond repair and the the color was dropped, leaving the illustration in black and white in all future printings.

I believe the current Books of Wonder reprint of Ozma of Oz restored this image in color, though I do not have a copy of that edition to confirm that. In any case here is the Queen of Ev in color
Posted by David Maxine at 8:00 AM

I do have the Books of Wonder reprint (and a gorgeous job they did on that, too), and I can confirm that that picture of Billina and the Queen of Ev is in color — complete with the coloring errors cited in your post (but happily not the buildup of ink and the stuck-together pages).

Yes the books of Wonder Edition does have the Queen of Ev and Billina in Colour although some work may have been done to correct the Colour as Billina is yellow in this edition and the red build up seems to be missing.

Thanks for this post. I love seeing explanations for things I've always wondered about.

Thanks guys - I was pretty sure BOW had included and cleaned up that image - I just didn't want to blatantly state so without a copy in hand to be sure.

I always thought that the Queen of Ev looked like Mary MacKillop, who was a nun and is now a Saint.

Though now in comparison to your blog, my book's picture looks pale.