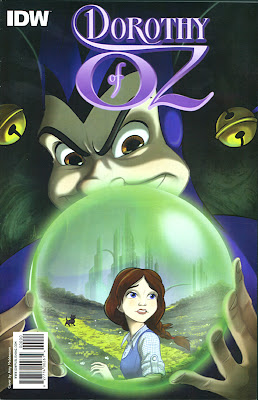 Another cool thing Eric brought back from last weekend's WonderCon was the cool preview of the new Dorothy of Oz comic book series.

The press release states: "The comic, produced by publishers IDW and Summertime Entertainment, is the first in a series of five progressive books carefully designed to bridge the gap from the classic L. Frank Baum Wonderful Wizard of Oz tale to the upcoming 2012 release of the animated New Dorothy of Oz, based on the book by his great-grandson Roger Stanton Baum.

“There’s a lot of overlap in the worlds of Oz-lovers and comic book fans, so we figured this was an ideal medium to help set the story framework for where next year’s New Dorothy of Oz film will begin,” said Dorothy of Oz Transmedia Producer James Jones.

“The comic series will continue to reveal what happened in Oz once the wicked witch was gone, and its people fell under the control of a new menacing villain. The film will essentially pick up where the last comic left off.”

Let's hope for more cool Dorothy of Oz freebies at other cons this summer! Here's a link to one of last summer's freebies.
Posted by David Maxine at 2:20 PM