A few weeks ago I stumbled across some beautifully produced Wizard of Oz stationery created by 7321 Design.

It is based on illustrations from The Wonderful Wizard of Oz, yet the designers have gone to great lengths, in both research and creativity, to create a very original package. At right you can see one of the envelopes. It is printed to look very old and stained, it has some faint typing in the upper corner, and a faded ink inscription. Both are text from Wizard. 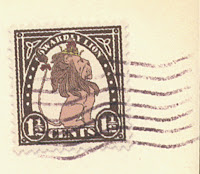 There is also a canceled one-and-a half cent Oz postage stamp in the upper right-hand corner showing the Cowardly Lion. It's pretty cool! That said, it does seem like this letter writing paper is more for one's amusement rather than for actual use. It would be a shame to have to cover up the Oz stamp with a real one, and I don't imagine the U.S. Post Office would honor the Ozzy one either. 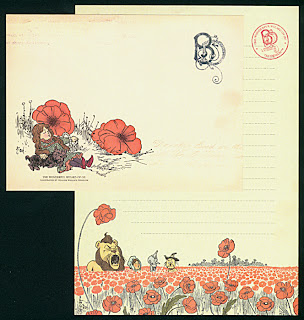 The Poppy Field letter writing set (at right) comes with two different paper and envelope designs. The alternate envelope features a monogram inspired by Baum and Denslow's initials in the colophon of the first printing of Wizard as well as more decorative Ozzy writing.

There is also a set of letter-paper featuring illustrations from when Dorothy and her friends arrive at the cottage just outside the Emerald City. It too comes with two letter and envelope designs (see below). The stationery sets also include a set of  red foil letter-seals, each embossed with the Baum/Denslow initial design. 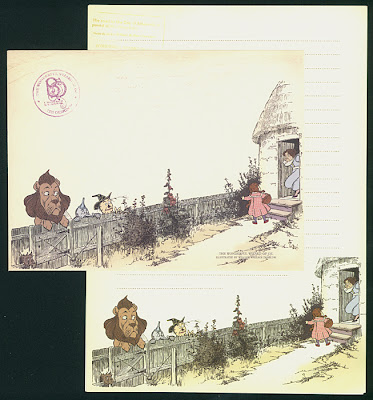 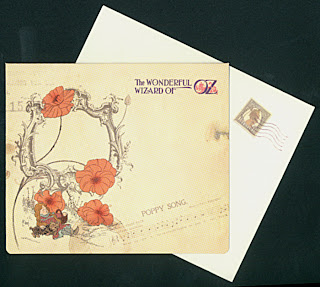 There is also a  greeting card set. It comes with only one card and one envelope - but it's pretty cute! I especially love the visual quote of music from the "Poppy Song" from the 1903 WIzard of Oz musical.

The envelope is decorated with another of the Ozzy postage stamps. The interior of the greeting card is printed with another illustration of the Poppy Field. Instead of the foil letter seal the greeting card comes with an adhesive backed "seal" made of sealing wax (or possibly plastic). It says "The Wonderful Wizard of Oz" in Denslow's own font and features the Lion entwined OZ (see below). Pretty cool stuff! 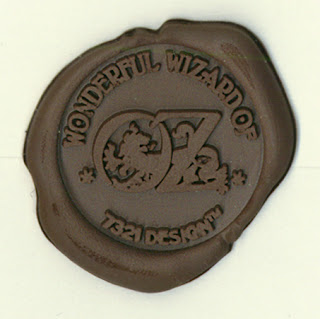 hey buddy, where can I get that stamp!!! I WANT THAT LION STAMP SOOO BAD!!!