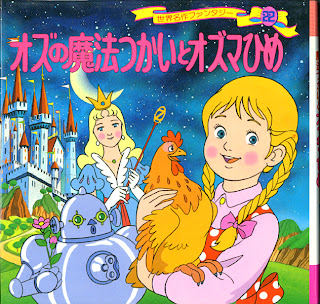 This weekend I bring you another post focusing on L. Frank Baum's third Oz book, Ozma of Oz. Many of you are following Eric Shanower and Skottie Young's adaptation of that book from Marvel Comics and I thought you might like a look at Ozma through foreign eyes.

This weekend's Ozma post focuses on a charming Japanese picture book published by Popura Shabunko, of Tokyo, in 1987. The book's title is a bit unusual, Ozu no Mahoutsukai to Ozuma Hime which translates as "the Wizard of Oz and Princess Ozma". Other Japanese editions of Ozma translate the title more traditionally as Ozu no Ozuma Hime "Princess Ozma of Oz". There are picture book editions of The Wizard of Oz and The Land of Oz as well. I suspect that the popularity of Disney's Return to Oz film that motivated the publication of these three titles. There is similar set with different illustrations by another Japanese publisher, also published in 1987. 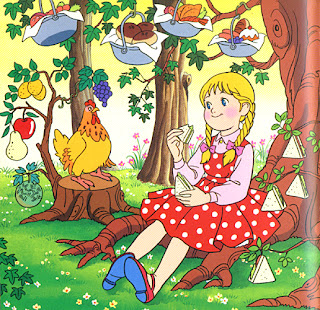 The edition was published in hardcover with a dustjacket and has 44 pages. Below you can see several of the more interesting illustrations. At right, Dorothy gale enjoys a meal from the Lunch Pail Tree while Billina looks on. The way these lunches grow you can sort of see what you're getting - they're more like cafeteria trees - you just pick a couple sandwiches, a piece of fruit, and a doughnut and you're all set! 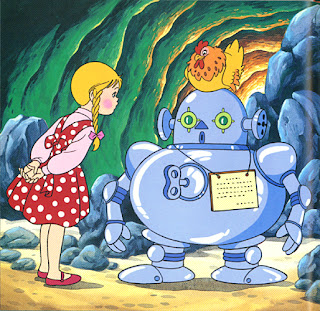 I think the design for Tik-Tok is pretty cute.I'd love a toy version! The wind-up key at the front is a bit odd as it seems like Tik-Tok might be able to wind himself. I've always assumed Tik-Tok's manufacturers placed his wind-up keys on his back and under his two arms so that Tik-Tok couldn't be self-winding, thus preventing their robot from attaining true autonomy. The inability of the traditional Tik-Tok to wind himself is one of the things that helps define him as "non-living."

The Japanese illustrator did follow Baum's text and hang Tik-Tok's "operating instructions" from a clunky cardboard sign around Tik-Tok's neck. It seems like it could easily get lost, IMHO. Below you can see Tik-Tok giving the Wheelers a hard time. 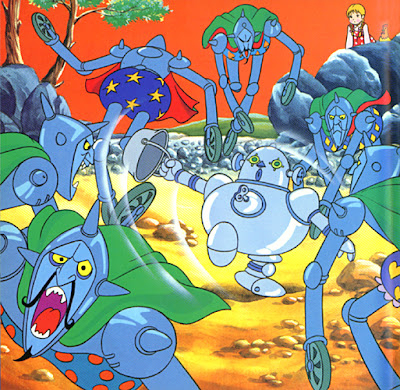 The arrival at the entrance to the Nome King's caverns is striking and very different. We also get a nice view of the Nomes slaving away in the jewel mines. Click on any of the images to see them enlarged. 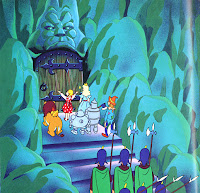 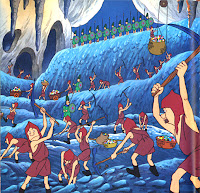 Every spread of the picture book contains one full page color illustration and one page of text with a small illustration echoing the larger image. Below you can see a sample showing Dorothy giving the Nome King what-for. The book is really cute!