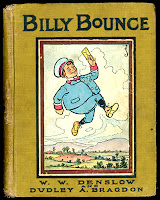 On rare occasions I have had a dream involving unusual Oz stuff. I stumble into a bookstore and find a previously unheard of Oz book by L. Frank Baum. Or I wander into a garage sale and find a ratty old box marked "Geo. M. Hill" and it's full of many pristine first printings of The Wonderful Wizard of Oz - all in immaculate dust jackets.

The find described below is certainly not as much fun as finding a box of Hill Wizards would be, but it is almost as unbelievable! Here's a little background.

Original Wizard of Oz illustrator W. W. Denslow was also one of the first comic strip artists. In 1901 he began a comic page called Billy Bounce. In 1906 Billy Bounce became a children's book with illustrations by Denslow and text by Dudley A. Bragdon.

Well, one of our readers recently discovered an animated pilot for a Billy Bounce TV series. Made in 1963 by some of the Terrytoons animators, Billy Bounce was probably un unaired pilot. Denslow and Bragdon are fully and prominently credited for the source material. The credits even going so far as to imitate the way Denslow signed artwork - including his signature hippocampus! (That's the seahorse.) 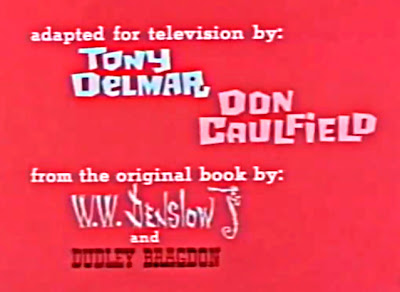 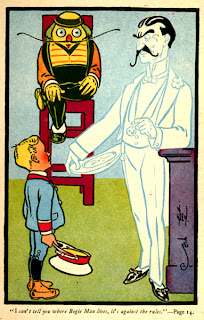 This single episode is based on the over-packed first chapter of the 1906 novel. The villains, Nickel Plate and Bumbus the Bee, hire Billy Bounce to deliver a message to the Bogey Man. Billy asks Mr. Gas for help and is given an inflatable rubber bouncing suit.

The newly discovered cartoon is a big improvement over the source material. Were there any more episodes? Since this one has remained unknown for so long, there probably weren't. But who knows? Maybe a complete long-lost Billy Bounce television series is out there somewhere!

So here is the video of the first episode of the long-lost 1963 animated  Billy Bounce. Who would have imagined such a thing existed!

1907 plus 56 years of copyright brings us to 1962, so this cartoon was probably created immediately after its source material went into the public domain.

A big improvement over the source material? Hm.

Thanks for sharing this. Who knew I'd be watching an early 60s version of a W.W. Denslow story in 2011?

@ J.L. - Somehow I doubt anyone bothered to renew BILLY BOUNCE in 1934. Denslow was long gone and the book out of print. But possibly the producers were indeed rifling thru works that should have just hit PD and happened upon BILLY BOUNCE.

I kind of like to think it was a dream project of someone who fondly remembered the book from childhood.

@ Glenn - Well I find the BILLY BOUNCE novel so irritatingly cloying that I thought the '60s wackiness improved the material a bit.

I just found an on-line text if you want to compare: