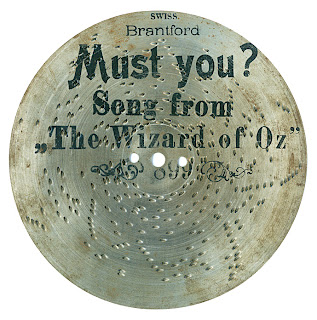 About fifteen years ago I began collecting very old recordings from the 1903 Wizard of Oz musical. I found many 78rpm records, old wax recording cylinders, and player piano rolls.

But a few years into my little obsession I made the acquaintance of a fellow Oz fan and vintage recording buff. She said she owned two Mira music box discs featuring songs from the 1903 Wizard, and asked if I'd like to hear them. Of course I said yes, and a week later I got a tape of her two Wizard of Oz discs, Must You? and Sammy. They were charming and tinkly and a very neat find.

The next year my friend came to the Winkie Convention and brought the two music box discs for her show-and-tell. They were made of heavy gauge steel, 15" in diameter, with holes punched through the steel leaving sharp teeth sticking out the back. The disc could easily double as a nutmeg grater!

I included recordings of both my friend's discs on my 2 CD set Vintage Recordings from the 1903 Wizard of Oz. Since the CD came out a couple mores discs have surfaced featuring the Oz songs, The Bullfrog and the Coon, and I Love Only One Girl in this Wide, Wide, World. I eventually acquired a few for my own collection including the Must You? disc shown above. That one is actually a smaller 7" disc - and it has a much shorter playing time than the big ones.

Steel music box discs were produced by many different companies in the early 1900s. They came in all sizes, too, ranging from 5" mini-discs on up to 33" monsters. There were many competing brands and, for the most part, one company's discs will not play on another company's machine.

You can find out more about the song Must You? in our TIGER TUNES Archive. You can listen to a 1903 Edison cylinder recording of the song, follow along with the lyrics, and even download the sheet music.

Okay, it's time to give this steel Frisbee, this musical cheese-grater, a spin! I don't actually own a player, but a friend generously made a video of the disc in action for me. So click below and listen to Must You? from the 1903 Wizard of Oz.

That's really fun - and yet another odd little specialty to keep an eye out for!

It stops? I thought sure it would go round & round endlessly. Is there a setting for that?

Fun hearing this, thanks.

@Glenn - not sure if there's a switch fro endless play or not.

@Bill - Oh No! The curses of sharing treasures on-line! I htink the answer is you can only find things I already have...