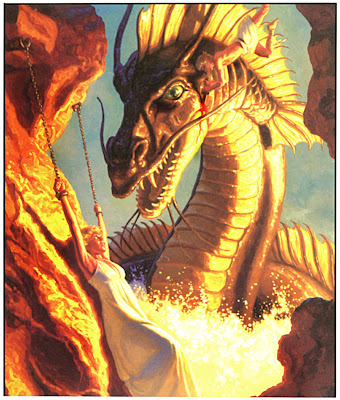 When Eric Shanower attended art school at the Joe Kubert School of Cartoon and Graphic Art, one of his teachers was illustrator Greg Hidebrandt. He was Eric's painting teacher.

At the time Hildebrandt was also in the midst of illustrating a series of much beloved classics. Often Hildebrandt would ask students to pose for him. During his second year at school Eric Shanower was asked to pose as Perseus rescuing Andromeda by slaying the Sea Monster. You can view the results at right.

It wasn't a long posing session for the painting. Eric simply lay on the floor, Greg shot reference photographs, and then painted from them. The illustration appeared in Greg Hildebrandt's Favorite Fairy Tales (1984).

As many of you may know, in 1985 Hildebrandt illustrated a new edition of The Wizard of Oz. It's still available and quite beautiful in many ways - Hildebrandt's Hammerheads are unique!

Interestingly, there is also book on Hildebrandt's artwork called From Tolkien to Oz (1986) that features a number of illustrations from Wizard as well as the painting of Eric Shanower slaying the Sea Monster. Below are Eric Shanower's memories of posing for Greg Hildebrandt:

"On Fridays in spring 1983 Greg Hildebrandt taught painting to my second-year class at the Joe Kubert School. This was during the time Greg was estranged from his twin brother and painting partner, Tim. One Friday Greg asked several students, including me, to pose for illustrations for a new book.

"The same day I'd asked Greg to write a recommendation for a scholarship I was applying for to get tuition money for the next school year. Greg agreed, telling me to write a paragraph or two and he'd sign it. I had to mail the scholarship application and recommendations that day. After school Adam Kubert and Jay Geldhof--in Adam's car--picked me up and we went to the post office where I mailed the application.

"Then Adam drove us to the home of Jean Scrocco, Greg's agent. Hildebrandt Brothers paintings hung throughout the Scrocco house. Greg pointed out how his painting technique had loosened up over the years. I particularly remember a Lord of the Rings painting done with his brother where the brush strokes were so tight that they were barely visible. In the living room hung a painting by Greg of Jean and her then-husband in a fantasy setting, done in a much looser style.

"Later Greg and Jean both divorced their spouses and married each other. Jay asked me back then whether I thought Greg and Jean were having an affair. I guess Jay sensed something between Greg and Jean, but how serious it was at the time I don't know. 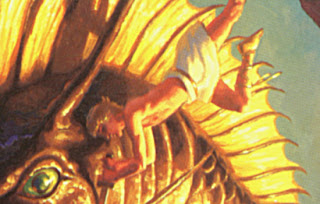 "The basement studio where Greg photographed models for his paintings had a bunch of costumes and props. Ron Wagner was first to be photographed as Seigfried. A lot of us knew that Ron usually went commando, but fortunately he'd gone home to change between class and posing since his fur costume didn't meet in the back. Then Adam Kubert, Andy Kubert, and Jay were Odysseus's men. I was last, dressed in a piece of fabric pretty much like what you see in the painting with a tan leather strap for a belt. I lay down on the floor and held a sword in the position that Greg had indicated in his preliminary pencil sketches. I rested the point of the sword on the floor, but Greg had me raise it about an inch, so that I was actually holding it in the air in front of me. I probably made the skinniest Perseus ever. Greg stood on a step-ladder to point the camera downward. He used a Polaroid in order to see the photographs immediately. That was the same technique he taught when we students illustrated Edgar Rice Burroughs's At The Earth's Core for his class.

"After the photo shoot, Adam, Jay, and I went to White Castle for burgers. The Kuberts loved White Castle. Later that evening I went to a crazy body-painting party with a bunch of other students--including Jay as well as Anna-Maria Cool (then Coleman), who since has illustrated Oz books. The party started at one house, moved to the house I was living in, then ended up at the Rockaway Mall midnight movies to see Rude Boy with The Clash. 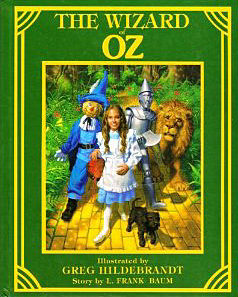 "The following year, my third year at the Kubert School, Greg was planning the paintings for The Wizard of Oz. Greg wasn't one of my instructors anymore--he taught the second-year class--but I mentioned to him that it would be great if he illustrated a different Oz book since Wizard is so commonly re-illustrated. I thought that The Patchwork Girl of Oz might interest him. I believe he actually considered this suggestion, but I'm not surprised that he decided to stick with Wizard. It's better known and surely from a sales standpoint a better bet.

"I hoped to pose for Greg's version of Wizard, but he didn't start photos till after I graduated from JKS in May 1984. I didn't keep in touch about posing and was busy with other work. However, that summer signed copies of the published Greg Hildebrandt's Favorite Fairy Tales arrived in the mail for Jay and me, who were sharing an apartment at the time. It was great to see the final book."

I really enjoyed seeing and reading both versions of this one Blog!

It's great to have a good friendship with a Teacher who teaches you in Art Classes, I know.