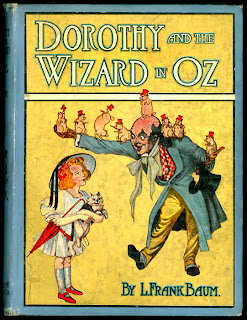 I've already mentioned on this blog that my partner, Eric Shanower, is currently writing the scripts for Dorothy and the Wizard in Oz, the fourth volume in Marvel Comics' graphic novel series adapting L. Frank Baum's classic Oz books.

I ran across an unusual bit of primary research today and thought, "I should tell Eric about this." But then I thought, "Gosh, just share it with everyone!" So here it is.

It's a ten-minute film photographed from a vehicle traveling down Market Street in San Francisco just six days before the infamous 1906 earthquake. Dorothy Gale is caught in that quake in the opening pages of Dorothy and the Wizard in Oz at 5:18 AM Wednesday, April 18. She and Uncle Henry had recently returned to the United States from Australia, and they've been sight-seeing in San Francisco for a few days before Uncle Henry's visit to relatives on Hugson's ranch. So this film shows San Francisco exactly as it appeared to Dorothy. She would have been there when this footage was shot.

I think it's fascinating to see the little kids playing, see how the automobiles are beginning to outnumber the carriages, see the actual San Francisco that Dorothy would have seen. It is also a San Francisco that would be destroyed by earthquake and fire six days after this was filmed. 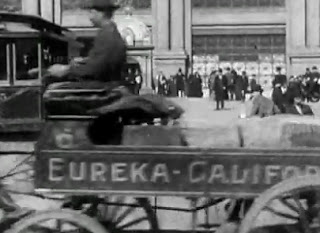 There is one sorta kinda Oz reference in the film - at least I'm deciding it's an Oz reference. At time-marker 8:30, a wagon passes in front of the camera. It features bold lettering on the side: "Eureka - California."

Imagine Dorothy has just found a stray kitten. She decides she would like to keep it. An old rattle-trap wagon comes lumbering past Dorothy and Uncle Henry on Market Street and Dorothy says, "Eureka? That's a funny name for a town, isn't it, Uncle Henry."

Uncle Henry explains that "Eureka" means "I found it."

The film was shot on April 12, 1906, six days before the earthquake on April 18th. You can read a bit more about it by clicking here. The video link below is to the best restored version of the film I've seen online. Turn your speakers off to avoid the weird new-age soundtrack.

As someone who actually lives in Eureka, California, I am amused.

I wonder what Uncle Henry would have said about Yreka?

I loved seeing that, thanks for posting it. It's hard to imagine that traffic in big cities could be any worse, but I guess if we had to share the roads with horses and carriages it would be. Those poor horses, where did they stable them all? And imagine how dirty the streets must have been. I don't envy the women in their long skirts trailing on the ground.

You were so right about the dreadful soundtrack. I turned the sound off in YouTube and instead played some tracks from your 1903 The Wizard of Oz CD, it made for a much better accompaniment.

Actually I was kind of amazed at how clean the streets actually were - given the horses.

Regarding the traffic, notice too, that there are no traffic lights or stop signs yet. In a way it's a lot like walking down a crowded side walk - people crossing in front of you as the come out of stores, people in a hurry are passing, some folks stop to mail a letter, others are ambling slowly along while they chat. Viewing it like pedestrian traffic it doesn't look nearly as chaotic.