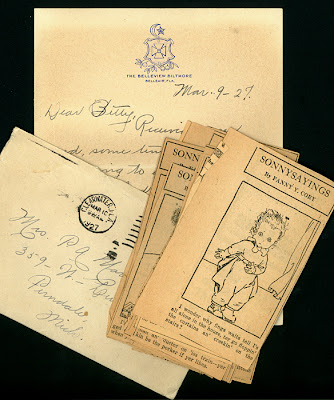 One of the fringe benefits of writing this blog is the occasional e-mail I get from a stranger who has learned something from the blog, or someone who wants to share something with me. I just received a nice little packet in the mail from one of my readers.

The packet contained a letter and envelope dated March 9, 1927. In the fold of the letter were 26 clippings of Fanny Y. Cory's cartoon SonnySayings.

Fanny Cory, of course, was one of Baum's early illustrators. She illustrated both The Master Key (1901) and The Enchanted Island of Yew (1903), and she was an important and early woman cartoonist, best known for these SonnySayings cartoons and her depression era comic strip Little Miss Muffet.

The letter to "Betty" from "N. M." makes reference to the clippings: "Am sending some clippings I cut out of the N. Y. paper, thought they were 'cute,' expect you will think I'm a nut."

SonnySayings is an acquired taste. Or put another way, a little Sonny goes a long way. I have a couple scrapbooks full of clippings at this point - these were a nice addition. I think they're sorta cute, but expect you'll think I'm a nut. 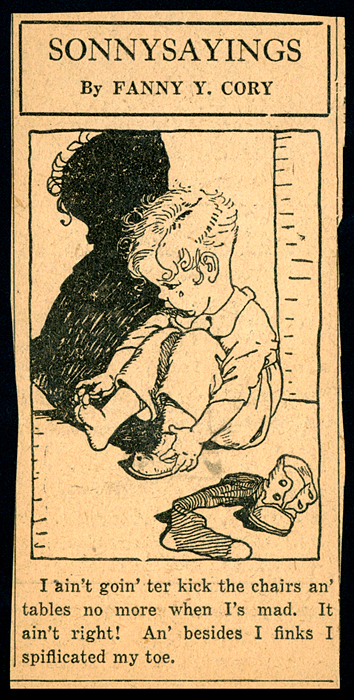 I hope you'll post a few more in the coming days/weeks/months...

We'll certainly be seeing ore Cory as the blog continues!

Oh. You do have something for when you run out of Sis.

Hah! And it's alliterative, too! Sonny Sayings Sunday!

I was just telling my pastor about the memories i had as a young girl, when I’d stay over night at my grandma Shirley’s, she would get out her Sonny Sayings books of clippings her momma had glued onto blank paper, my grandma would use such expressions when she read , it made me laugh and I just couldn’t get enough, I will treasure this memory. My grandma passed , but my momma still has these “ books of Sonny and will be passed on for others to make good memories!! Ty for this blog, I’m so glad I googled Sonny Sayings!!