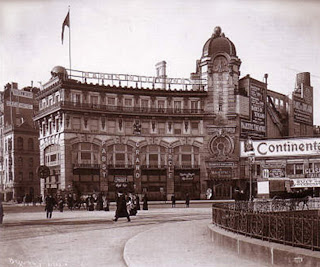 Many of you may know that the 1903 Broadway Wizard of Oz stage musical opened at the Majestic Theatre on Columbus Circle. In fact, Wizard was the show that inaugurated the theatre.

There are a handful of period photographs of the Majestic in 1903 and 1904 showing either advertising for The Wizard of Oz or for Babes in Toyland. By all accounts the 1354 seat theatre was a state of the art venue - with no columns obstructing sight-lines, an electric stage lighting system, and air conditioning. 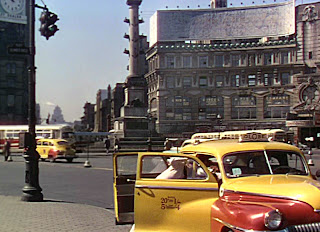 The northeast facing walls of the theatre provided space for painting large-scale ads for the shows that played at the theatre. You can see an example in this previous blog post. But there is still another way to catch a few fleeting glimpses of the legendary Broadway landmark.

You can see the Majestic for a few fleeting seconds in the 1949 technicolor movie musical On the Town (see right) when a taxi drops off the three sailors at Columbus Circle.

The Majestic almost has a starring role in the 1954 Judy Holliday and Jack Lemmon film It Should Happen to You in which Gladys Glover (played by Holliday) tries to make a name for herself by renting ad space on the side of the Majestic Theatre to launch her career as a celebrity. 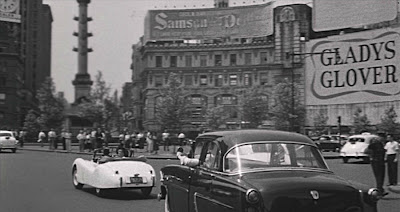 The Majestic underwent multiple name changes over the years and by 1954 it was called the NBC Television Theatre and was the home of Sid Caesar's Your Show of Shows. 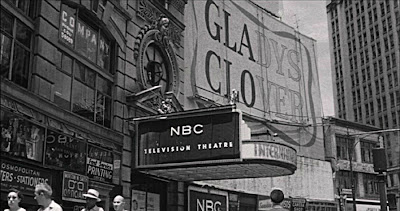 I had never heard of It Should Happen to You until several years ago when a friend told me of the connection to the Majestic Theatre. If you like classic old comedies, in the Frank Capra vein, I highly recommend it. Judy Holliday and Jack Lemon are wonderful. The film has a very funny screenplay by Garson Kanin, and it's directed by George Cukor! What's not to like? I'm surprised the film isn't better known.

So that's your Ozzy lore for today.
Posted by David Maxine at 2:57 PM