This past November I participated in National Novel Writing Month. To participate in this event, a person is supposed to write at least 50,000 words of a novel in thirty days.

The rules state it should be a new novel, not something you've already begun, but you can work from an existing outline and notes. By November 27th I had topped 50,000 words and thus won this year's NANOWRIMO, along with everyone else that hit the word-count bullseye by the end of the month.

My novel is not Oz-related, it isn't a fantasy, and it isn't a children's book. It's probably a Young Adult novel - possibly just a novel. In any case, the reason I am blogging about it here in Oz Land is that I've been reading a lot on fiction writing and the novel. 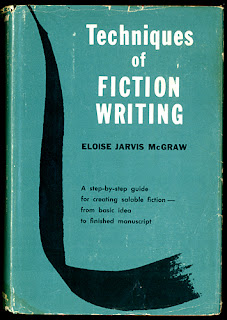 And one of the books I've gone back to is Techniques of Fiction Writing (1959) by Eloise Jarvis McGraw. Perhaps you didn't know that a Royal Historian of Oz had written a book on writing fiction. It's a very good nuts-and-bolts book assembled from a series of articles by McGraw that were originally published in The Writer magazine.

Over the years McGraw taught many classes and seminars on fiction writing, and in 1979 she recorded a Books-on-Tape lecture series, How To Write Fiction for Young Readers, for Monosette Productions.

I'm currently relistening to the tape series and making digital copies of the tapes for fear the thirty-year-old cassettes are going to disintegrate any minute.

The twelve tapes cover much more than McGraw could cover in her book, and she reads many examples from books she likes. She also peppers the tapes with personal information and anecdotes about her life, her kids' and grand-kids' lives, and with thoughts on a lifetime of writing stories.

Eloise sent me the tape series when I was about nineteen and first began writing fiction. I haven't written much fiction in the last twenty years, but I suspect I'm permanently bitten this time. I wish I could send my novel to Eloise. I miss her.

On a side note, I've also been devouring John Gardner's two books on fiction writing, The Art of Fiction and On Becoming a Novelist. I highly recommend both - especially if you like opinionated perfectionists.

So, next year maybe YOU should sign up for NaNoWriMo!
Posted by David Maxine at 1:19 PM

Thanks for the info David I will have to see if I can track all of these down. I learned a lot from this years NaNo it was much more succesful for me then the previous year's.

I didn't do Oz related this year either but my Ozma confessions manuscript is something I'm still working on.

I love Eloise Jarvis McGraw's work. Unfortunately she had passed on by the time I first picked up her books... I was really sad about that; I would have liked to write her.

Do you know if they still sell the cassette tapes anywhere? I really wish I could find them. Techniques of Fiction Writing is nearly impossible to find--the only copies available are like $79 and up. :( I hope they reprint it soon.