Last spring I presented a talk on Oz composer Louis F. Gottschalk at the Oz conference at California State University - Fresno. As most Oz fans know, Gottschalk composed the scores to L. Frank Baum's 1914 Oz films as well as writing the music for the 1913 Tik-Tok Man of Oz stage musical.

Since I needed a few stills from the 1914 Patchwork Girl of Oz film for my lecture, I made my own screen-grabs, and was amazed at how much detail could be brought out with a little tweaking in Photoshop and making sure to grab a well-illuminated frame. Here's a good example: 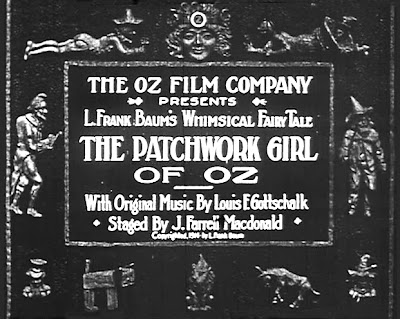 Look at the lovely and Ozzy sculpting work! This is almost invisible in the flickery and dimly-lit video releases. You can click on the image to enlarge it a bit.

Here's a favorite screen-grab showing Pierre Couderc as Scraps. It looks so much like a John R. Neill drawing brought to life. 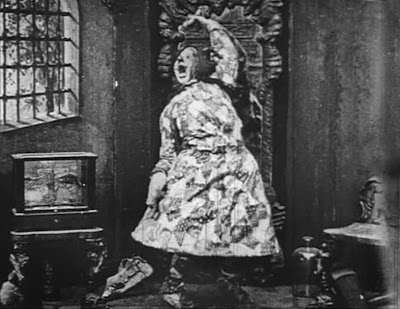 You can hear Gottschalk's film score to The Patchwork Girl of Oz, as well as a suite from The Tik-Tok Man of Oz, on our CD Before the Rainbow: The Original Music of Oz. It would be so great to get a good restoration job done on the film and include the original score, too.
Posted by David Maxine at 1:29 PM

Those look brilliant! I thought the treatment Warner Brothers gave the best silent films on their Oz sets has been a bit shoddy. They made the 1925 movie look great, but what of the 1910-1915 movies? Nuttin'. And on the latest one, the transfers for Magic Cloak and Patchwork were just plain lazy. And I wish they'd taken advantage of the fact that this was the first time these would be on Blu-Ray as well...

Yes, it would be good if there was a "good restoration job done on the film and included the original score, too.".

I have this film on both "the World of Oz" and the "70th Anniversary Edition". Jared and I recorded a Skype reviewing this (and the 1910) film - which has yet to be released online - and I spoke out about the difference between the two versions' picture quality.

If you can't wait . . . "70th Anniversary" has the film in clear black-and-white with the above screen title . . . HOWEVER the "World" version, although greyer and less sharp, has more imagery of the scene along the sides and a few more shots that show Dr Pipt being mad more at Scraps and the other Munchkins joining Ojo & Jesseva, including the "Part 1, 2 etc" screen titles.

Someday, in 2014 as a 100th Anniversary, I'd like to put this movie into a music video with the song "Belle of Belfast City" by Kirsty McColl (don't know why, I just heard the song and thought they'd be a good match!). Sometimes I even think Beyonce's "Single Ladies".

Would you like to be asked to help in the restoration?

What's that piece of furniture at the lower left? At first I took it for granted it was a TV!

The 1914 films on the MGM DVDs have not had any restoration. They are just the same dubs from the standard video tape releases.

The best DVD copy of PATCHWORK GIRL is the library of Congress DVD which is the only one to run at the correct speed, too. Sadly its a little bit dark.

The best way still to see the film is projected via real film.

@Glenn - Seems like some sort of cabinet - I'll look closer next time I watch the film. It does indeed look like a TV in its way. :)

i think the films of the oz film company are awesone