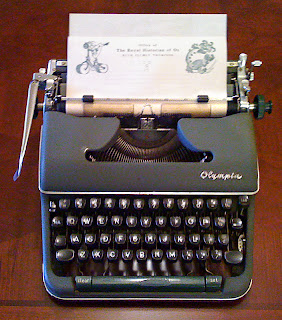 Today's blog is the tale of a typewriter - Ruth Plumly Thompson's typewriter to be exact.

In 1985, Thompson's niece, Dorothy Maryott, decided it was time to part with a few of her aunt's things and she donated RPT's typewriter to the Ozmapolitan Convention to be auctioned off. This preposterous collectible had to be mine! MINE!

I had read in The Baum Bugle how pioneering Oz collector C. Warren Hollister owned the pencil that L. Frank Baum had used to write The Wonderful Wizard of Oz. I thought to myself ... Hah! This will be my Baumian pencil stub! But I knew there would be some bidding competition - perhaps even from Warren Hollister himself! I began my pre-auction negotiations.

Most of the folks that I viewed as "competition" saw my youthful eagerness and said they'd give me a clear shot. But, DRAT! Warren Hollister had the notion that it would indeed be a good companion piece for his pencil stub. 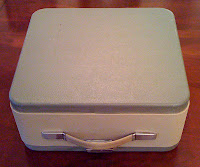 Warren and I talked, I tried my best pitiful look, and we eventually struck a playful bargain. He agreed not to bid on the typewriter; and I agreed that if at any other auction I was bidding against him he could say the word "typewriter" and I'd stop bidding. Done deal! By now you may have already surmised that I went on to win the typewriter.

I must add that this is not RPT's typewriter from when she was writing her early Oz books. It was her typewriter from the early 1950s until her death in 1976. But it was the typewriter she used to write Yankee in Oz and The Enchanted Island of Oz. 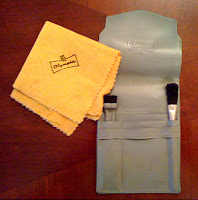 The typewriter came in its case (see above) and even included RPT's typewriter cleaning kit!

After the auction, I heard that Dorothy Maryott wanted to talk to the young man that had bought her aunt's typewriter. She found me a bit later that afternoon and congratulated me on my win. Then she said that she had something she thought I might like to have to go with the typewriter.

She pulled a small bit of folded blue fabric from her handbag. She had withheld it from the auction - unsure if she really felt like parting with it. But after she saw my youthful excitement at winning, she decided that maybe I should have it after all. 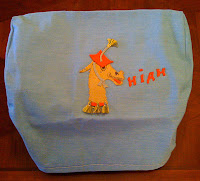 It was a dustcover Maryott had made for the typewriter while her aunt was writing The Enchanted Island of Oz.

It was decorated with an applique showing Humpty Bumpty, the camel from what would be Thompson's final Oz book. I happily accepted the dustcover as a gift.

And that is how I came to own RPT's typewriter and sign off today's blog post with it, too.

That is truly a great item David!

Cute story, not the kinda thing I'd go for but it's certainly fun to read about your chase.

So this typewriter safe word rule, Did it get implemented in any of the other auctions?

No, the "safe-word" was never used. Warren and I joked about it a few times before he died - but he never used it. Phew!

... I don't suppose you are writing your NaNoWriMo novel on RPT's typewriter?

@Glenn - The Hollister Family still maintains Warren's collection and the pencil. And, no, I am NOT writing my NANOWRIMO novel with the typewriter - I use the computer :)

Typewriters are cool. Even in this age of an average American home having a computer. Nothing like the smell of ink and the frustration of stuck keys and letters!

And a typewriter with an illustrious history is even better!