Dr. Zaius in Oz; or Me and My Megos

An earlier version of this blog post appeared on MySpace. It has been expanded and revised a bit for Hungry Tiger Talk. 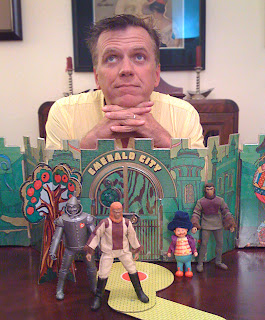 I've been thinking a lot about play - or more specifically, how I played as a kid. I am trying to remember how it worked, how I did it, what it felt like.

All of my favorite toys were puppets, stuffed animals, and the like. I also loved movies and had a strong passion for Planet of the Apes. I devoured the movies, watched the prime-time TV series, and the animated Saturday morning cartoon. I even tracked down the Pierre Boulle novel - which I also loved. I found it especially sexy somehow that Boulle's astronaut was completely naked as Zira took him for walks around the city.

As readers of this blog know I also loved L. Frank Baum's Oz books. As I've mentioned previously, my Second Grade teacher, Mrs. Strong, at Monte Vista Elementary School, in Albuquerque, read them to us a chapter to two a day after lunch. I also discovered the MGM movie, which I came to love as well. So one can hardly overestimate my childhood joy at discovering that MEGO (a toy company) was producing  8-inch action-figures of Planet of the Apes characters, followed a bit later by Wizard of Oz characters, among many others, including another childhood obsession, Star Trek.

But back to play. I would ask my sister something like, "Do you wanna play Oz? or Apes?"  And she pretty much always did. We would then go to my room and "prepare the universe". We had a couple dark furniture throws and these would be tossed over carefully arranged pillows, cushions, piles of clothes to create mountain ranges and valleys as wide as the bedroom - a terrain for the play to occur within. We would then set up the Emerald City or Ape City in our room-scape and the play would begin.

But I don't remember how we did it! We devised such elaborate plots and story lines! They often continued from day to day, too. But there was no discussion that I recall about how to do it, no set rules for who "operated" which characters. It was a seamless flow of interaction between the two of us: handing off characters, improvising dialogue, manipulating plot, creating back-story with no effort whatsoever. But I don't remember how we did it! We were just so in synch - everything worked. And we both fell into a hypnotic state where the room would fall away. Our hands, hopping the characters across the bedspread, would vanish. We did little more than channel Zira, Cornelius, and Dorothy Gale! Yes we mixed up the worlds in crossovers quite often.

It worked REALLY well, too! Sometime apes would go to Oz; and sometimes Oz characters would go to the Planet of the Apes. If you think Dr. Zaius (the ornery orangutan) freaked out when he saw a talking human you should have seen how apoplectic he got over talking lions, Tin Men, and little girls with dogs!

Sometimes Doctor Zaius went to Oz! At least once the Wicked Witch captured him and thought he was her runaway flying monkey. She could NOT understand what happened to his wings. "Curses! It's that Dorothy Gale's doing!" But then again sometimes Captain Kirk and Mr. Spock would beam in at just the right moment and then all hell would break loose! The Wicked Witch would over hear Kirk talk about dancing Orion slave girls (who are green!) and the Witch would decide she could trap Kirk and Spock by stripping and dancing for them! You may recall that the Wicked Witch is green, too.

I do not know if other MEGO-loving kids did this cross-pollination thing. Sometimes I would buy duplicate action-figures to make them into additional characters. I "aged" a Cornelius with white paint and miniature glasses to make someone I called Dr. Barlow. We turned an extra Glinda the Good into Laverne DeFazio to play with my sister's Fonzie figure. A few characters I just made from scratch: a Patchwork Girl and a Sawhorse come to mind. Some ideas we never quite pulled off probably due to lack of money. I always wanted to buy a set of the Grandma and Grampa Walton dolls to become Aunt Em and Uncle Henry but I guess I just didn't feel like spending $15 to get two sort of boring characters. A couple of the Walton's daughters would have made a great Betsy and Trot; and I had my eyes on one of the Walton's boys to be Zeb Hugson.

But is was so magical, so addicting! This hypnotic-state of play occurred whenever my sister and I played with our anthropomorphic toys: puppets, stuffed animals, etc. Once on a car trip I told her that there was a miniature universe in my pants-pocket. I pulled out bits of lint and stuff from my pocket and introduced them as animals, live stock, etc. I made a tiny little woman out of a scrap of Kleenex, too. But I swear we could see "pocket-world!"

And that's what I miss! I miss my imagination being that powerful. I think I still have a strong ability for fantasy and imagination and daydreaming - but I can't quite make the real world disappear anymore - at least not with pocket lint!

Email ThisBlogThis!Share to TwitterShare to FacebookShare to Pinterest
Labels: Toys

Twisted Mego theater was comic done with photographs of Mego toys for Toyfare Magazine. The names was later changed to Twisted Toyfare theater. You should check it out.

Much more than I expected. A real treat! Such pros are great to watch! An enjoyable night after getting Wicked tickets early.It was had by all of us (Young and old).

What a wonderful post! It took me back to my days of playing dolls with my sister. She and I were playing a few years before the Mego dolls were available, but we did have almost all of the Oz hand puppets that Proctor and Gamble gave away as some sort of soap promotion. We had both read and loved all fourteen of Baum's books and we wrote and put on our own Oz plays using the hand puppets and some of our other dolls. I think Barbie and Betsy McCall probably made a few trips to Oz. We had a huge extended family of dolls that existed in a world where our Mary Poppins doll and a G.I. Joe were the parents of Barbie whose little sisters included not only twin Skippers but twin Betsy McCall dolls. I remember games where we pulled out the bedspread on my sister's bed and draped it across boxes to make caves. There was one game where all of the dolls became stranded on a desert island. Like you, I can remember some of the scenarios, but I don't remember how we did it. How I would love to have a record of the dialogues we must have provided for our doll characters. I look back on those days with great fondness and I miss being able to conjure up those magical, spur of the moment play adventures. It's sad that as adults it becomes so difficult for us to see the world as a child sees it.

You've brought back lovely memories of my Mego toys -- DC superheroes with the Hall of Justice playset and Star Trek with the Enterprise playset. They are sitting upstairs in one of the spare bedrooms right now.

For me it was Masters of the Universe, GI Joe, Transformers, Star Wars and so on... I used to line up all the playsets I had (quite a few fisher price ones) into two rows, one where the bad guys would hang out and one where the good guys would hang out... though I often incorporated more girly events into my play as well... characters going on dates, that kind of thing.

Occasionally they'd all line up and have a big battle...

But I'd really love to have some Oz toys.

Ha ha for me it was a cross over of Oz, the Muppets and Ducktales!
I used to force my mates and brother to be different characters and no one would bat an eyelid when I was Dorothy!
Imagine then how excited I was when the Muppets were to make The Muppets Wizard of Oz.
Then imagine my disappointment at how terrible it was when it was released!

My mind could create Land's and Universe's with little effort when I was a kid. It's a shame that it does get the chance to be as imaginative anymore.