Programs! Get Your Programs! 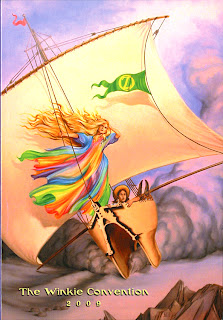 In 2009 I served as Chairman of the Winkie Convention, the largest and longest-running of the International Wizard of Oz Club's annual Oz conventions.

One thing I did in 2009 was to produce and publish an elaborate Program Book for the convention. It contained not only the basic necessities: schedule, maps, information on mealtimes, etc. But I also included a lot of bonus material, interviews with the speakers, bibliographies, essays on the conference's theme by respected Ozian writers, illustrators, and scholars. The 2009 Program contained contributions by: Ray Bradbury,  Gregory Maguire, Eric Shanower, John Fricke, J. L. Bell, Edward Einhorn, and Michael O. Riley. Also a pin-up gallery containing new Ozzy art by Skottie Young, Tommy Kovac, Joe Phillips, Eric Shanower, and Steven Weissman. There was a good deal of other stuff, too, filling out the book's 128 pages. The cover was reproduced from the original painting Michael Herring did for the 1978 Del Rey edition of The Road to Oz. 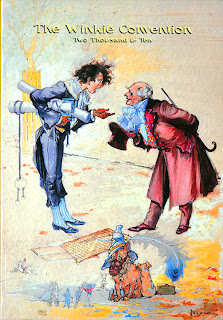 I was so pleased with the response the book got that we decided to make it a tradition and I prepared a Program book for the 2010 convention as well. This year's volume contained essays by Robert Baum, Edward Einhorn, Judy Bieber, Booklist columnist Michael Cart, and Atticus Gannaway. Bonus features included an art gallery by illustrator Frank Kramer, excerpts from Baum's Flying Girl novel, and a large portion of the 1932 comics adaptation of The Emerald City of Oz, as well as a couple extremely rare items from the Baum Family.

The tradition will continue in 2011 when I am again serving as Chairman for the Winkie Convention and we will again have a deluxe Program Book. But we have a new twist! For several reasons we need people to register as early as possible this year. As an incentive, all people who register on or before December 1, 2010, will receive a hardcover copy of the 2011 Program Book! This may seem like short notice, but the information has been included in all our mailings and on the Winkie Convention tab in the header of this blog. This is just a final bit of encouragement! The cover for 2011 will be a new full-color wraparound image created for the Program Book by Eric Shanower. Just to be clear - All Con attendees will receive the paperback version of the program! The hardcover edition is a thank you gift for the early registrants.

If you want to take advantage of this opportunity, you need to print the Registration Forms from the PDF below and send them to the Registrar listed on the forms. Please try to make sure your letter is postmarked by December 1st! Or contact the Registrar at phanff@library.berkeley.edu and tell him it's on the way. The Registrar can also answer any questions about this.

It's gonna be a great Convention and a great Program Book! Don't miss out!


You can download our PDF Registration Forms at the link below:
http://hungrytigerpress.com/winkies_2011_registration.pdf
Posted by David Maxine at 9:45 AM

I wish I had the money in hand... but I will register asap... too bad I won't get a program.

Just to be clear - all attendees of the Winkie Con will get a copy of the program. The fringe benefit for the early registrants is a hardbound copy. The others will all get the paperback one - but all the same contents and stuff :)

OH, and it sounds like I managed to convince Sam to come all the way from Australia!

Well I figured that, I meant a spiffy program!

@Jared - I heard! That might just be a record for distance traveled to an Oz con - though I suspect Israel provides some pretty stiff competition.

@Raye - Well, the paperback is pretty spiffy, too!