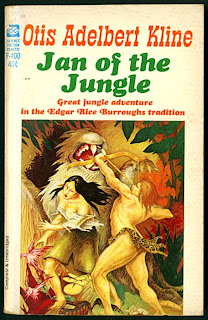 Many readers of this blog are also fans of John R. Neill's beautiful illustrations - and many collect his non-Oz illustration work as well. But one of the more unusual Neill illustrated titles is the 1966 Ace Books rack-size paperback edition of Otis Adelbert Kline's Jan of the Jungle.

When collecting Neill illustrated books one doesn't usually think of  looking in rack-size paperbacks dating from the mid-1960s. So what's going on?

Well, Neill did a lot of illustration work for Argosy magazine. And in 1931 Neill illustrated Jan of the Jungle for Argosy. Ace Books, an inexpensive science fiction publisher simply reissued the novel and used a couple of Neill's illustrations. Neill did many other illustrations for the Argosy version of the story. 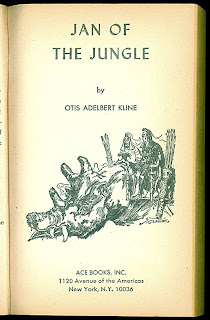 This book actually belongs to my partner, Eric, who has read it and says its a very decent Tarzan-esque novel. Indeed, Kline is considered by many to be the greatest of the Edgar Rice Burroughs imitators. Two of Kline's most respected books are The Swordsman of Mars and The Planet of Peril.

Below you can see a more detailed scan of the illustration from the title page. 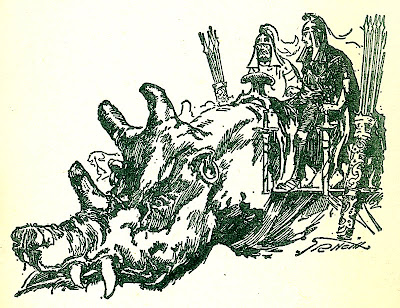 How funny - I certainly wouldn't expect to find a Neill piece there!

Swordsman of Mars so not only did this guy imitate Tarzan but also John Carter of Mars as well? How strange. Or were they unauthorized sequels?

I wanna see the sea serpent illustration! I loves me some John R. Neill.