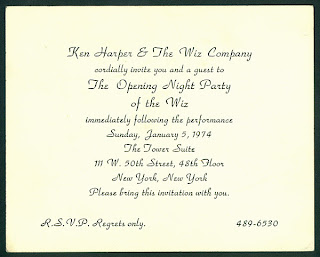 Today we share a cool bit of theatre memorabilia from the original Broadway production of The Wiz.

This is an invitation to the Opening Night Party on January 5, 1975. Interestingly, the printer or copy writer has given the date as 1974. No doubt this is a mistake the likes of which many of us have made just as the year is turning. The invitations were probably ordered in December of 1974.

The show success came slowly over the next weeks as word-of-mouth and an innovative television commercial drew in an audience. I wonder how many people going to that party new they had a mega-hit on their hands that would run for years!
Posted by David Maxine at 10:33 AM

Email ThisBlogThis!Share to TwitterShare to FacebookShare to Pinterest
Labels: Musical Theatre, The Wiz