Wizard on the Roof

One of the strangest videos I own is a private VHS tape that a friend sent me. It was a video of a production of The Wiz being performed by children at a Hebrew camp. Yes, these sweet little white Jewish kids performed The Wiz in Hebrew! Songs, too. Oy! 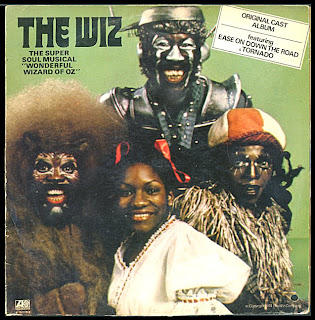 I am not going to be posting YouTube excerpts! However, I will take the opportunity to share an image of the rare Israeli release of the Original Cast recording of The Wiz.

What makes the record so interesting to me is that it uses a photograph of the Fab Four instead of Milton Glaser's beautiful, but stark, Tornado dancer image.

The music on the album is the same as the American release; it is not performed in Hebrew. If only it were!
Posted by David Maxine at 8:00 AM

Songs always sound interesting in Herbrew... I'd be curious to see that kids vid.. but even if you were to put it up, the copyright holders of the Wiz are a jealous bunch and would strike it down.

But thanks for telling the story, it made me smile.