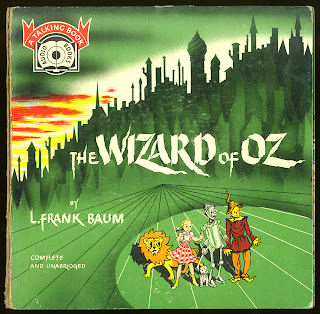 There's a pretty good collection of old Ozzy recordings here in the Tiger Den and one of the more unusual ones is this cute little set I found in a Goodwill store in Albuquerque when I was about fifteen. I think it probably cost me about twenty-five cents.

This little album measures 7.5" x 7.5" and holds five small records the size of 45s. However, these are recorded at the arcane speed of 16 and 2/3s RPM. This was a short-lived format for making talking books. This very slow turntable speed was not adequate for music but worked fine for spoken dialogue. Indeed this little set contains the entire text of L. Frank Baum's Wonderful Wizard of Oz read aloud on its ten sides. Back then my Dad's phonograph had a 16 2/3 speed setting and I listened to the recording. It was pretty good as I recall. My current phonograph does NOT have this speed on it but it could be easily played by recording it at 33 1/3 RPM and cutting the speed by half in a computer-based sound editor.

This set was released in 1956 the year Wizard entered Public Domain.It was produced by the Audio Book Company of St. Joseph, Michigan.

Each spread of the album is illustrated in color showing a scene from the book. (See below) It's a really beautifully produced little album and one I have not seen come up for sale very often. That Goodwill in Albuquerque gave me several neat finds; but none as cool as this one.