AGE OF BRONZE: The European Tour!

Finally I can take a moment and fill our readers in on our European antics during the European Age of Bronze tour! It's a long blog!

The first stop was Bristol, England. Eric had been invited to speak at the Imagines II - Seduction and Power conference which is about the use of Antiquity in the Visual and Performing Arts. There was also an exhibition of Eric's original Age of Bronze artwork at The Bristol Gallery where the artists being shown were Eric Shanower and Henri Matisse! Hah!

We managed to work in a day trip to Cardiff (Eric and I had never been to Wales before), and many of us at the conference took day trips to Bath and a stunningly beautiful estate called Stourhead near Wiltshire. The last day we took the train to London (where we spent a few hours) before heading to the airport to fly to Athens.

Eric had been invited to speak at The American School of Classical Studies at Athens. We stayed in the huge mansion of a house occupied by the Director, Jack Davis, and his wife, Shari Stocker. The first day we went to the National Museum in Athens. The next day we took a long day trip to Delphi to visit the oracle. Delphi was stunningly beautiful - the first place I have ever visited that may rival Yosemite for sheer natural beauty.

We departed Athens the next day for a three-day  personal tour of important Bronze Age sites in the Pelopenese. First up was Mycenae. Seeing Eric's face as we saw the Lion Gate for the first time was wonderful. Eric and I were both surprised that the approach was so steep! It doesn't look like that in photographs. Next up was Tiryns, and then a stop for the night in Nafplion. Next day gave us a trip to Pylos and on to Kyparissia where we were to spend the night with friends. It was very warm and Eric and I went to the beach for an hour or so and watched the sun set. The next AM we departed for Athens but stopped to visit Corinth (even though it isn't primarily a Bronze Age site).

We spent the next couple days seeing Athenian sites, the Acropolis, the Temple of Olympian Zeus, Hadrian's Libary. Eric did multiple interviews and ended up on the front page of two of the biggest newspapers in Greece! Eric finally did his lecture in Athens, on the same program with Apostolos Doxiadis and Alecos Papadatos, the creators of the graphic novel Logicomix. We left Greece just in time to dodge a strike of the Air Traffic Controllers thanks to Olympic Airlines moving our flight-time up by several hours. 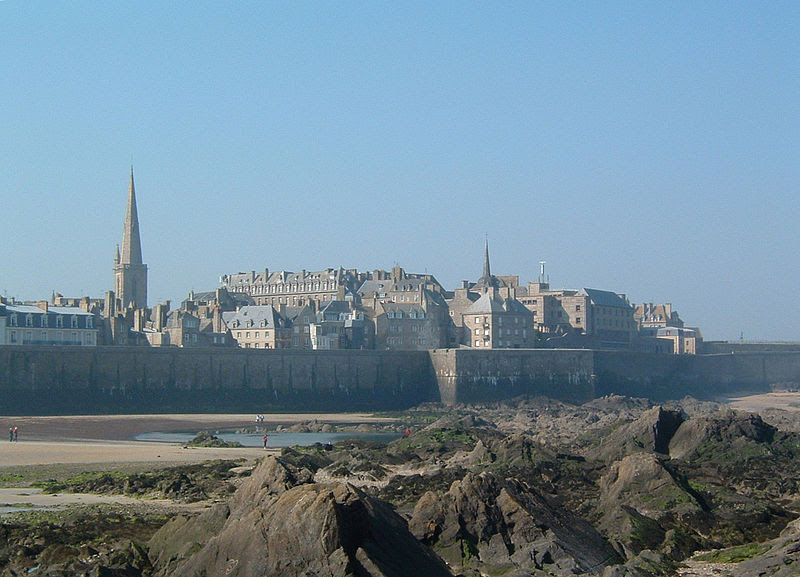 We were now off to Paris where we had to immediately catch our train to Saint Malo for the Quai des Bulles Comics Festival. Saint Malo (at left) is a wonderful old walled town that looks like it was built in the Seventeenth Century. It was actually leveled during World War II, but was carefully rebuilt as before.

This was our second time at the French comics festival. I love it! Eric sits and signs books all day long. And I get to walk the ramparts, drink little cups of coffee, hike out to little islands when the tide is out, and have fun. Twice Eric and I had lunch on one of the islands, Grand Bé. We'd buy some bread, cheese, grapes, and a bottle of Cidre Brut. Voila! Le dejeuner a eté preparé!

After Saint Malo we began the Age of Bronze signing tour! A new volume of Age of Bronze had just come out. The French are actually ahead of the USA at this point in AOB collections. The beginning of the signing tour coincided with the beginning of a French national strike, so our train connections were doubtful at times. But only one stop on the tour, Tours, had to be canceled because we just couldn't get there by train on the day scheduled. The rest of the tour went relatively smoothly. Our first stop was Caen where Eric signed at a wonderful comic shop called La Cour des Miracles. We also visited the castle of my 29th great grandfather, William the Conqueror.

Next up was a signing in Bordeaux (at BD Fugue) where we stayed with the family of Eric's French publisher; and then on to a signing in Poitiers where Eric signed books at Bulles d'Encre and I played tourist visiting two lovely 1000 year old churches. We returned to Paris where Eric had his final signing in Boulogne, a suburb of Paris, at Le Comptoir de BD. We spent the last day in Paris on our own. We saw a major exhibit on cartoonist Moebius (Jean Giraud) and then went to the Musée d'Orsay and finally dinner with friends.

The next day we flew to London where we had eight hours to kill before our train to Bristol. We went to the British Museum followed by a nice dinner. The next day we began our flights home.

It was a truly grand trip!

Matisse+Shanower...that has to feel great. :) Sounds like an amazing trip!