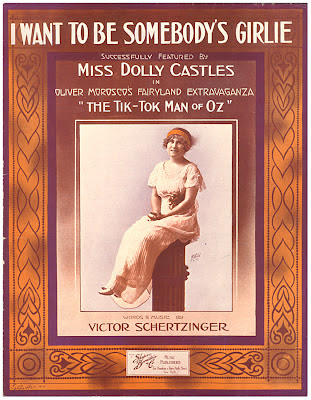 A new arrival in the Tiger Den is this piece of music from the 1913 musical The Tik-Tok Man of Oz. Indeed, "I Want to be Somebody's Girlie" is the only piece of published music from the show that I had never been able to track down in almost twenty years of hunting.

I knew of the sheet music's existence because it was listed in the 1977 auction of Justin Schiller's Oz collection. But no one has been able to tell me where that copy ended up, and none of my Oz music collecting friends has a copy nor does the Library of Congress. In my two decades of hunting I would have been very happy for just a photocopy, but now I have a real one.

I knew it was a song by Victor Schertzinger, music director of Tik-Tok Man of Oz, but I has assumed it would look like the other three Schertzinger Tik-Tok songs with the blue and orange covers and the clock-girl faces like the one below. 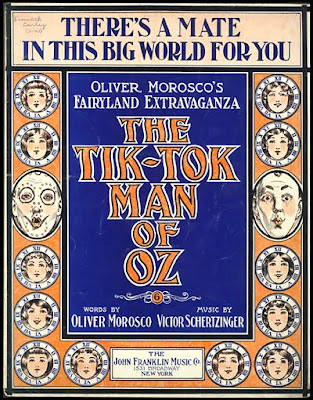 Based on the sheet music cover, "I Want to be Somebody's Girlie" was performed by Dolly Castles as Polychrome, though I don't find the song listed in the half dozen Tik-Tok Man programs I have access to. Still, it must have been in the show and gotten at least a bit of a following, or why put out the sheet music?

In closing let me say this is the clearest photo I've seen of Dolly Castles. I can't say she makes me think of Polychrome much. Perhaps she was very colorful on stage.

Email ThisBlogThis!Share to TwitterShare to FacebookShare to Pinterest
Labels: Music, The Tik-Tok Man of Oz

Great find! And what fun to be able to finish off a collection as well!

So how'd you get your copy? We like stories!

@Bill - I am still missing a few TTMoO song sheets in actual "vintage" copies. But counting photocopies I do now have EVERYTHING from TTMoO that was published and that we know of. I'll be blogging on another find along these lines soon.