Today we look at one of the rarest but most intriguing of all Oz maps - the map given away to promote Walt Spouse's comic strip series The Wonderland of Oz in 1932.


The map is quite beautiful - Walt Spouse has based it very closely on the 1914/1920 Wogglebug map, but he has added a decorated border using his character designs from the comic strip. There is a new legend at bottom center and a new and very ornate compass rose featuring traditional east/west directions.

The most obvious change Spouse has made is to color each of the lesser countries its own color: Oogaboo is blue, the Yips are pink, Jinxland and the Skeezers are orange. I don't think Spouse is suggesting those are favorite colors of the countries, he is simply using color to delineate borders like most real world maps do.

If you look closely you will see that Walt Spouse has added a good deal of detail to the map. He has extended a river to run through the Skeezer Country and actually drawn in Skeezer Lake. He drew in a little house icon for Mombi (an important location in the first book serialized in the comic strip). 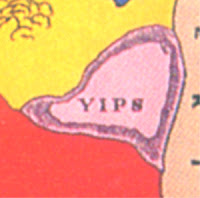 Spouse has also drawn topographical lines around the Yip Country showing that the entire triangular area originally drawn by Baum is the Yip's mountainous plateau. This is what I always imagined when I first read The Lost Princess of Oz. The later Oz Club map turned the Yips into a little round mountain - contradicting previous Oz maps.

Walt Spouse put a lot of effort into this new map of Oz. He carefully followed the 1914/1920 Baum map, but with equal care he refined it as if he was working from updated surveyor's reports. Look at the comparison of the Winkie River system below. The general shape matches Baum's map, yet there are subtle undulations and new tributaries shown.


It's a great map. I don't own an original copy of this map, but I'd dearly love to have one. If anyone reading this has a copy of the map they'd like to sell, by all mean drop me a comment and let's talk!

That's it for this week. Next week we'll be looking at another intriguing map!
Click here for the next Oz Map blog post.
Posted by David Maxine at 1:07 PM

This is my first time seeing this map I think.
It is very pretty and I love the coloring and details.
I was wondering how you feel about Martin's map and I'm curious to know...since you almost seem not to like it...(At least not compared to Baum's) I guess I'll have to wait until that post though when you really discuss it!
I look forward to Map Mondays.

It is too bad that the WONDERLAND OF OZ strip did not go beyond TIK TOK OF OZ -- Perhaps Spouse would have added locations from these books as well.

Also, what is (or are) the map(s) for next week? Chronologically, the maps filled in or redrawn by Thompson (published in the Autumn 1970 and Sping 1982 BAUM BUGLEs)should be next as they appear to have places through PURPLE PRINCE OF OZ published in 1932.

Has anyone noticed that along the decorative border among Spouses' renditions of the Baum characters featured in the WONDERLAND strips are Pigasus and Roger the Read Bird from PIRATES IN OZ (1931). Perhaps this was a way of promoting the most recent Oz book (PURPLE PRINCE may not have been published yet when the map was drawn).

Miss Thompson made maps too? I am very excited to see hers and compare them with the club's maps then!

Also, did I just read correctly that Mr.Spouse's strip went all the way to Tik-Tok?

@Anonymous - thanks for the mention of the RPT characters - I just wrote a new blog post about them :)

@SFA - Yes, Spouse's Wonderland of OZ comic did run thru TIK-TOK but he skipped DOROTHY AND THE WIZARD and ROAD