Blogger's Note: A few days after the following blog was written I was sent a scan of the "real" Coloring Contest Map described in the Ozmapolitan articles below. Click here to see the blog discussing the newly discovered map.

In 1926 Reilly and Lee revived The Ozmapolitan "newspaper" to promote the publication of The Hungry Tiger of Oz. One of the articles announced that the "Royal Surveyor Wants Help on New Maps of Oz." It seems Ozma had requested that new maps be prepared and the article points up some areas of investigation for kids to research and solve. Here's the full article: 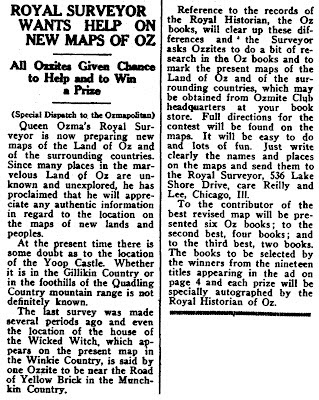 I do wonder if there was any genuine confusion at Reilly & Lee that prompted this contest and the two examples of areas to research. The Yoop issue is of course that Mr. Yoop from The Patchwork Girl of Oz (1913) is indeed in the Quadling Country - but his wife, Mrs. Yoop, lives in a castle in the Gillikin Country, a castle which is not shown on the map. The issue about the Wicked Witch is interesting. Virtually every Oz reader knows there were TWO wicked witches - one in the Munchkin Country and one in the Winkie Country. 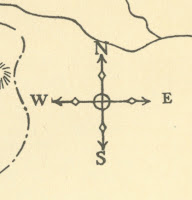 I can only guess that Reilly & Lee were finding themselves hoisted on their own petard because in 1920 they had flipped the Oz compass from Baum's backwards one to a traditional one.

I imagine this caused many a young reader to scratch his head trying to figure out why (after 1920) the Wicked Witch of the West was shown as living in the east. After all, The Wizard of Oz is the book most seriously affected by Reilly & Lee's compass correction. The geography and directions are explicit - down to the very name of the villain.

All that aside, this map contest was a pretty clever ploy to get kids to read the Oz books - and to "research" and correct the 1914/1920 map of Oz.

The maps were issued the following year to promote the Oz series and the new Ozmite Club. The official announcement came in the 1927 issue of The Ozmapolitan promoting the publication of The Gnome King of Oz:

The article above has now added the suggestion that the maps should not only be corrected, but colored in, too. The downside of this contest is that the kids had to mail their maps away. Perhaps this explains the scarcity of the coloring contest maps? Also, they are printed on somewhat brittle uncoated paper. But that prize is pretty good - Oz books specially autographed by Ruth Plumly Thompson! I have not seen any evidence of who the winners were, and the 1928 issue of  The Ozmapolitan doesn't mention the maps or the coloring contest at all.


The printed coloring contest maps measure 10" x 15". One side features a Map of the Land of Oz and the other shows the Countries Surrounding Oz. Seeing the map in black and white really exaggerates the "stretch" at the center of the map which I described in the blog two weeks ago. It looks like someone has cut a huge firebreak through the Gillikin and Quadling countries. Note, too, that the directions for the coloring contest do not appear on the map - the news articles above stated that they would be there. It's possible only the earliest maps had the directions and once the contest was over the map was reprinted sans directions. But I have yet to see an example with the "printed directions." [Blogger's Note: A reader has sent me a scan of the actual Coloring Contest Map with directions included.  Click here to see it.]

This is the first time the map of the Countries Surrounding Oz (shown above) has been reprinted since it was included in the first edition of Tik-Tok of Oz in 1914.  Note that Reilly & Lee has corrected the compass points to the traditional (non-Baum) directions.

Ruth Plumly Thomson kept a great stack of these maps and often sent them to children that wrote her fan letters. Thompson tried in vain for many years to get Reilly & Lee to issue new maps - the very maps that "the Royal Surveyor" was supposed to be working on - maps that would include places from HER Oz books, too. Sadly it never happened. But we will be revisiting these maps and some thoughts Thompson had on them in the coming weeks.

I find it interesting that these maps were issued in 1927, the same year that Dick Martin was born. As we will see in the coming months, Dick Martin's Oz maps from the 1960s thru 1980s have become, for many, the standard reference of Ozian geography.

It's annoying when companies who HAVE their places/characters in ownership can't even get them right. Just like Disney and their classic Princesses: they're not showing them properly or even doing GOOD pictures that look good (Cinderella is blue and blonde instead of White/Silver with light brown and Aurora looks more like Daphne from Scooby-Doo)!

The contest winner should have been whoever could update the map in the most thorough way.

I'd never heard of these maps before. Thanks for posting this.