Today would have been Rachel Cosgrove Payes's 93rd Birthday. She is, of course, the author of Hidden Valley of Oz (1951). I began corresponding with her in the late 1970s, and we finally met for a visit in 1985. But in the early 1990's Rachel became a much bigger part of Eric Shanower's and my lives. Eric had begun work illustrating Rachel's second Oz book The Wicked Witch of Oz (1993), and she began attending the Munchkin Conventions on the east coast. Soon after Wicked Witch came out Eric and I moved to New Jersey and I began Hungry Tiger Press. I asked Rachel for a new Oz story for the premiere issue of Oz-Story Magazine and she wrote one for me!

Eric and I had Oz-story publication parties and Rachel and her husband Norman would attend, always bringing a bottle of wine, maybe some cookies, and usually Rachel would make us an elaborate greeting card.  She also gave us a "Statue of David" refrigerator magnet that still adorns our fridge. The photo at the top of this blog post is from the Oz-Story No. 3 Party in 1997.

In thinking about what I might share with you on Rachel's special day, I realized I had never seen a youthful picture of Rachel, so I hit up my genealogical resources and located a few. Here she is at nineteen, in the 1942 West Virginia Wesleyan College yearbook (she graduated in 1943).

I recognized Rachel immediately without having to go to the name index on the photo spread. She has the same wonderfully friendly but very determined look I so well remember her for.

There were a few other images in the yearbook, too. I especially like the image below showing Rachel relaxing on the campus lawn. The photo, presented in the fore-matter of the year book, is captioned: "And Rachel finally gets some E's . . ." Alas, I have no idea at all what that means!


She can also be seen in the Sigma Alpha Sigma photo. Rachel is in the upper left. 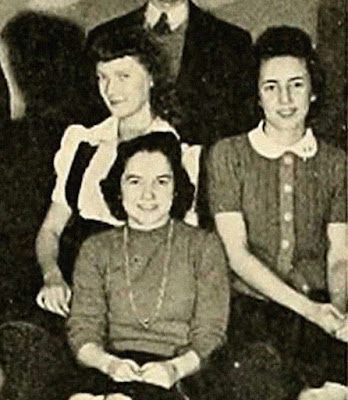 You can read quite a few other blog posts about Rachel and her books by clicking here.

I can only offer a couple of possibilities In the 50s and early 60s, I attended schools that had grades:
E: Excellent,
S: Satisfactory,
N: Needs Improvement, and
U: Unsatisfactory,
and another school that used E instead of F, perhaps because some past headmaster was obsessive-compulsive about keeping the alphabet pure.

A Person can merely enjoy two occasions relating to him/her personally.
One, is Birthday - a day in a year.
Another, is Marriage Day - A Day in a Lifetime.
Both are most precious ones, which stay memorable for a long time.

I wish you a very very Happy Birthday to you.