In 1980 I won the Munchkin Convention's Oz quiz. The quiz had been prepared by John Bell. Both of us were in our mid-teens. This was the first time I won a convention quiz and I was eagerly looking forward to the glory that came attached to such a win. And I had much anticipation for the Ozzy prize that was sure to come with it.

At my first Oz convention a few years earlier, the quiz prize had been a first edition of The Giant Horse of Oz, and I had gotten it into my head that quiz prizes should be substantive. Well, my prize for winning the Munchkin Quiz was a small cheese board, hand-made by John Bell himself. In all likelihood it had been made in John's high school "wood shop" class. It came with this "Certificate of Authenticity." 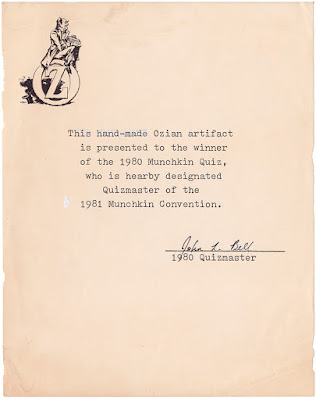 At the time, I was a bit disappointed in the little cheese board. Perhaps, John, too, thought it was a trifle too little as he augmented the cheese board with an inexpensive Whitman edition of The Wizard of Oz, which he had autographed by Margaret Hamilton, who was the special guest of the Munchkin Convention.


Now, in hindsight a copy of The Wizard of Oz signed by the Wicked Witch of the West sounds very nice, but at the time she was in the same room with me and I'd just had lunch with her and had her sign several other books I'd brought with me.

But over the years this once disappointingly cheesy prize has come to mean much more to me than some book or Ozian collectible would have. John and I are still friends and blogging colleagues. (John writes the Oz and Ends blog as well as the American Revolution blog Boston 1775.) And now, thirty-five years later, I really enjoy knowing that John made that stupid little cheese board for me back when we were both teenagers. And you know, for decades now it's actually been really useful for serving cheese! 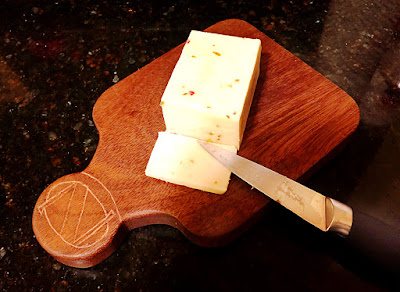 [Update] You can read John's version of the story by clicking here!

My side of the story (which agrees in all details) here.