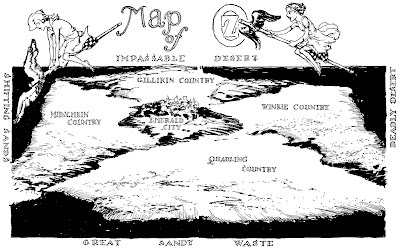 When I first saw this map it did make me wonder what Oz would look like if it were photographed from a high-altitude. Would the color of the vegetation be apparent enough to delineate borders to a viewer from on-high?  When I have a little time perhaps I'll try to make one in Photoshop. Someday ... someday ...
Posted by David Maxine at 7:49 PM

Can you Google Earth Oz through the Magic Picture?

Did winged-broomsticks actually have anything to do with the Oz book, or not at all?

Not to be picky, but I think it's actually "readers" not "reader's".

Sorry, about my impatience for the Monday Maps of Oz Blogs: I forget how demanding your schedule is.
I guess "Tuesday Maps of Oz" doesn't sound as good.

Dick Martin's 1980s panorama is laid out a bit like this map (but with much more detail, of course).

Sam, yes. Yes, they do. Did you skip my blog about the book?