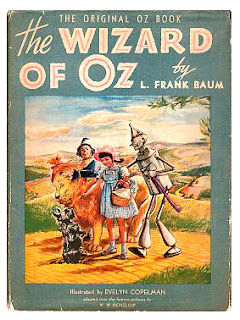 Doggone it, I thought Evelyn Copelman was safely on my list of "no need to collect" but you've moved her onto my want list. Her work is very attractive taken as a whole. I thought I'd never need to buy another Wizard. Now I need both a drawn and a redrawn version by Copelman.

I have the Copelman illustrated "Wizard" and I know one of the images is different (specifically the one with the Good Witch and her slate - differences include her outfit, the tree and Dorothy's presence).

But if I were interested in acquiring the revised version, how would I know to find the right one?

Reading that Evelyn Copelman (as Eleanor Campbell) illustrated the Dick, Jane and Sally readers (that's the name sequence I remember) rang a bell with me. I remember those books well from my childhood in the 1960s. I was reading the "New" series of the books, which probably came from the 1950s, and then an even newer series for my later grades from the same publisher, which abandoned the Dick and Jane family altogether. Wikipedia says Copelman/Campbell was only one of the illustrators in the 1940s, and that others illustrated the later books. But the style, with its depiction of a sunny, suburban, dare I say kind of Ozzy childhood, remained consistent.