In 1944 the Bobbs-Merrill Co. decided The Wizard of Oz needed a face-lift. The Denslow illustrations were a bit old-fashioned to everyone's WWII-era eyes. And they hadn't been reproduced well in over forty years, anyway. The publisher chose a young illustrator named Evelyn Copelman to give the book a new visual life. Sixty-five years later her version is still in print. You probably know it well. 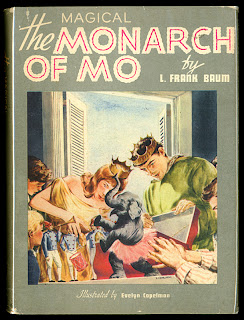 Less well known, though, is that in 1947 Bobbs-Merrill asked Copelman to reillustrate L. Frank Baum's The Magical Monarch of Mo. Undoubtedly, the publisher chose this title as it sounds like a perfect follow up to The Wonderful Wizard of Oz. The Copelman Mo was not successful. It is not one of Baum's best books, and title aside, it's not very much like The Wizard of Oz. It is little more than a closely related group of nonsense short stories. Copelman's illustrations are very interesting, though - in part because they really don't fit the book very well. The original Mo illustrator was Frank VerBeck, and his pictures were cartoonish in an Edward Lear kind of way. Copelman's were hyper-realistic and seem at odds with Baum's goofy text. 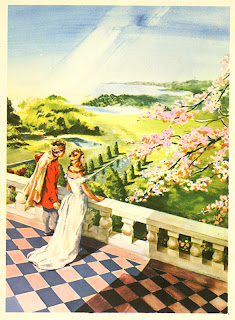 Copelman's work is very pretty. In fact her style would have much better suited Baum's Queen Zixi of Ix or even John Dough and the Cherub - far better than Mo.

In Mo it just doesn't work. Baum describes the titular character as "not very tall, nor is he very short; he is midway between fat and lean; he is delightfully jolly when he is not sad, and seldom sad if he can possibly be jolly. How old he may be I have never dared to inquire..."

But Copelman's realism kills off Baum's whimsical mystery. She has provided a very specific Monarch, a real-looking young man made of flesh and blood. On the cover (above) he's actually kind of cute! 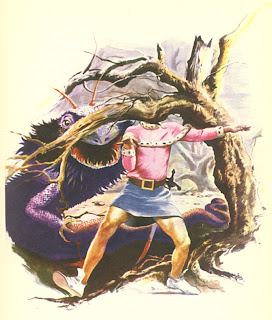 A few of Copelman's pictures are just not very good either. The painting showing the King having lost his head and pursued by the Purple Dragon is badly composed. It looks as if the Monarch might still have a head - that it's just hidden behind the limb of the tree.

Perhaps this was a request on the publisher's part, to keep gore to a minimum. Therein lies one of the problems in turning a nonsense book into realism. That said, until seeing the Copelman illustrations, I never would have imagined the Magical Monarch as having cute legs! 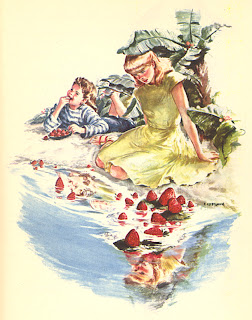 Somehow it's both fascinating and jarring too see the strawberry lily-pads growing in the cream at the edge of the Milk River.

Does this illustration style make Baum's text come to life, or does it kill the mental imagery of the reader? I remember when I first saw this image I thought, "Wow! So that's what it would look like!" But this was followed by a certain "Ewww..." factor.

But take a good look at the way Copelman painted these two kids, especially the one on the left. Look at their clothing, their faces. I'll come back to that in a bit. 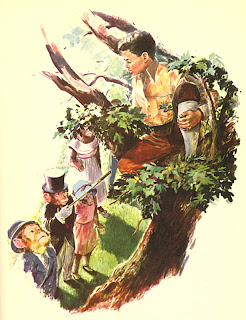 Copelman's style works a lot better during the Land of the Civilized Monkeys episode. Perhaps this is because to modern eyes it resonates with a bit of Planet of the Apes or Lancelot Link.

In the late 1990s I got to meet Evelyn Copelman at an Oz Convention. She was only in her late 70s at the time. She was very young when she illustrated The Wizard of Oz. It was her first major job. That weekend she autographed many people's copies of The Wizard of Oz - she signed one for me, too. But I was the only one I saw who had also brought along The Magical Monarch of Mo. She signed it "Best Mo wishes, Evelyn Copelman."  I was quite pleased. 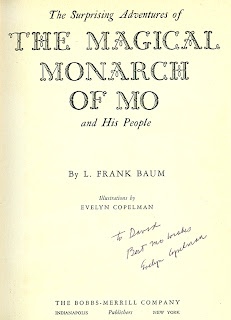 Evelyn Copelman told everyone a secret at that Oz convention. She was asked what else she did in her career. After all, she had illustrated a hugely successful edition of The Wizard of Oz and this Mo book and that was about it. Well, in fact, she did a lot of work, work even better known than The Wizard of Oz. But she had done it under a pseudonym, Eleanor Campbell. She was the illustrator of many of the Sally, Dick and Jane books, beginning in 1946 with the first-grade reader Our New Friends.

So take a look again at the boy and girl sitting on the banks of the Milk River and then look at the picture below. It adds a whole new perspective on these Mo illustrations - almost like Sally, Dick and Jane get to go to Fairyland!

Nice legs on that king who's bonking into a tree limb, I said to myself. Then I turned to your text ...