Homes of the Royal Historians

Eric and I were in the Pacific Northwest a few weeks ago and we spent a day or so of that time in Portland, Oregon. One thing I wanted to do was drive by the former home of Royal Historian, Eloise Jarvis McGraw (author of Merry Go Round in Oz, The Forbidden Fountain of Oz, and The Rundelstone of Oz.).

I had stayed in that house for several days when I visited Eloise back in the mid-1980s. You can read the blog about that visit, including several photos of the interior of the house, by clicking here. And even though Eloise is now gone I wanted to see the house again.


The house, located at 1970 Indian Trail in Lake Oswego (a suburb of Portland) was much like I remembered it - though there did seem to be a few more neighbors. As I recall, Eloise and her husband William Corbin had designed and built the house in the late 1960s.


It was really nice seeing it again but it also made me a bit melancholy, remembering that wonderful visit, sad that Eloise is no longer with us.


Click here to read more about my visit to the house in the mid-1980s.

It's always nice when something new gets to be hung on the walls of the Tiger Den - and this lovely drawing by John R. Neill is the newest arrival to the aforesaid walls.


In actuality Eric and I have owned the piece for several years but only recently got around to having it framed. It measures about 12" x 15". John R. Neill drew the illustration for a short story in the February 1926 issue of Pictorial Review called "An Actor's Love Story" by Richard Connell. Soon after we got the original drawing I tracked down a copy of the magazine in which it was printed. 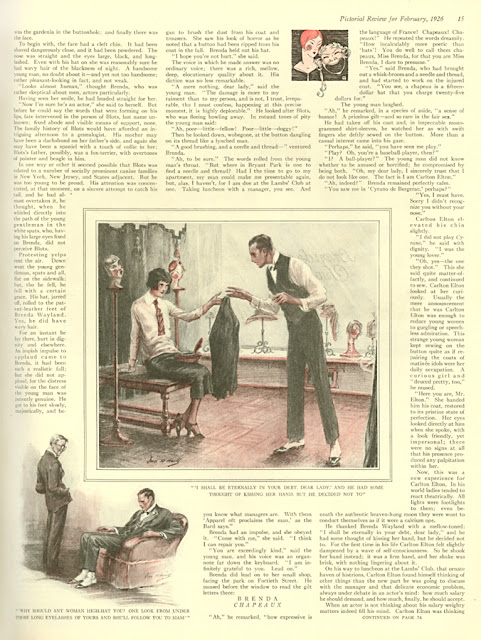 In the magazine the illustration is reproduced less than 6" across - a little over a third the size of the original. It's kind of amazing how large Neill worked, given the size of reproduction. As you can see, there is another Neill illustration on this page, the one at lower left, similar in technique to the one we own. The little square vignette at the top is signed "W" and seems not to be Neill's work.

There is another lovely Neill drawing reproduced on the first page of the story (see below).


I really like it and would love to have it as a companion piece to the one we have. Alas, I've no certain knowledge the original survives. John R. Neill sure does draw handsome young men really well, doesn't he? That's it for today!
Posted by David Maxine at 12:41 AM 3 comments: 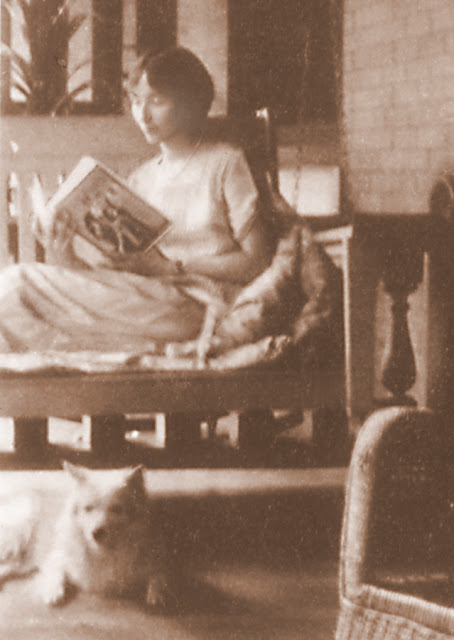 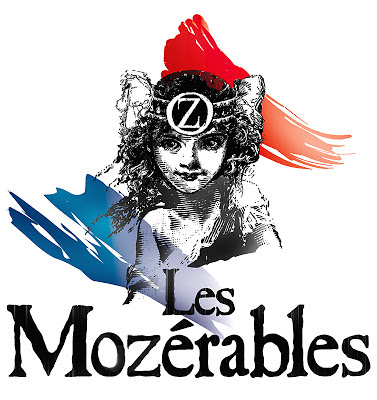 You may be wondering why I'm critiquing a movie musical on my Oz blog - the answer is three-fold: I have had the idea for the little visual pun (seen above) for quite a while; I found this a good time to share the little-known John R. Neill illustrated edition of Hugo's novel; and finally I'm still a bit peeved at the film and this is as good a place as any to to pitch some furniture into the street.

For me, the film of Les Mis fails on several fronts. The most problematic aspect of the film is the mostly mediocre singing and the often unintelligible lyrics. Director Tom Hooper's desire to film all the singing live instead of prerecording it is understandable, but it just doesn't work. And frankly it is a solution looking for a problem. No one has really ever had a problem with prerecorded singing in films - it's just the way movie musicals are usually made. Did anyone ever watch The Wizard of Oz and say, "Yuck, Judy Garland is so emotionless - she's just lip-synching!" Or turn up their nose on Julie Andrews spinning in the alps for the same reason? Of course not - people don't even notice - many people probably don't even know that's how musicals are usually created.

Now what many people DO object to in film musicals is dubbing - where the performer singing the role is different than the performer we see acting on screen. This "dubbing" very often does lead to a distancing and lack of authenticity in a film musical. One of my favorite movie musicals, My Fair Lady, is marred by the studio not allowing Audrey Hepburn to provide her own vocals. I just can't suspend my disbelief when I hear Marni Nixon's voice coming out of Aubrey Hepburn's mouth. As long as we're on My Fair Lady, I do want to take a moment to point out that Rex Harrison performed all of his songs in the film "live," just like they now do in Les Mis - contrary to the Les Mis PR, it's not a new technique. Thus I'm not wholly against the idea of live singing in film - I'm not even wholly against dubbing. For some reason I'm more than willing to accept Marni Nixon supplying the singing voice for Natalie Wood in West Side Story.

OK, back to why I think the live singing in Les Mis fails so miserably. For me, musicals are about enhancing dramatic structure, revealing character, story-telling.  If you can't for the most part understand the words being sung, the film is in big trouble. I suspect anyone who has not either read the novel or spent a long time with the stage musical could not tell you what's going on in the film. That is a big problem! This does not mean a fan of the musical can't enjoy this film - if you bring your preexisting knowledge of the characters, the story,  the lyrics, you may get a lot of pleasure from this plotless and unintelligible ramble of a film - it might even be a new favorite! But just because one likes something does not make it objectively good. Many folks - especially critics - seem to have lost track of this idea. For instance I love the 1970 film Pufnstuf. It means a huge amount to me and if I was going to be stranded on the figurative desert island I would take it along as one of the ten films I chose to be marooned with. The film makes me happy, nostalgic, joyous. But that is a subjective reaction. Objectively, the film is a piece of crap: it's a badly filmed, low-budget, cheesy Saturday matinee film starring a boy who can't pronounce the letter "r."  The vast majority of criticism of the Les Mis film amounts to saying "I like it," "I love it," "It's the best!" or worse, spouting off a few mindless sentences from the Les Mis press-kit explaining why gurgled heavings are the new singing and choppy editing is better than trying to tell a story in a visual medium. What a world . . . what a world . . . throw water on me now!

I heard an interview with Les Mis director Tom Hooper on the radio and I admired his ideas. I just think he failed to pull them off. I am curious why Hooper didn't take a different approach to the live singing. If his desire was to be able to give the actors the freedom to act, breath, and voice their parts on the fly while he filmed them, fine. But why not send everyone into the studio to re-record their voices for the final film - at least editing out the grunts, replacing failed notes, and making sure the words could be understood?

But there is a more basic reason I think Hooper's technique fails, and that is related to Les Mis itself - it isn't really a musical. Now before you start throwing tomatoes or old Oz books at me, hear me out. By musical I mean a story that is enhanced by music to advance the plot, reveal character, a drama where all of the parts must be present to make the whole. My Fair Lady, Carousel, Porgy and Bess, Cabaret, Into the Woods, etc. are stories that are told with music. Les Mis is music that tells a story. This is a HUGE difference. In effect Les Mis is an oratorio - and that's one reason I think the show has been done so often in concert form, in minimal stagings, and in recording after recording.  The music, the vocal aspects of Les Mis, are the core of the piece. When the vocal splendor of Les Mis was sacrificed for the huffing, puffing, and grunting in the film, it pointed up all of the show's inherent weaknesses as a musical. Les Mis without voices is like Sweet Charity without dancing. The point and joy in Les Mis is in the singing and everything should have been subordinate to that. But things being what they are, this will probably just inspire Mel Gibson to film Handel's Messiah with live singing and all the appropriate out-of-breath grunting, retching, and bleeding. Hallelujah! 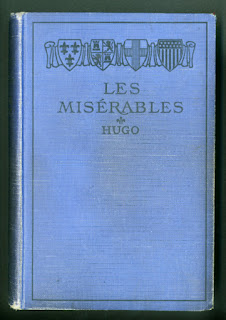 This edition of Les Misérables was published in 1925 by Ginn and Co. as an easy-to-read text for students of French. Hugo's sprawling novel is abridged to just over a hundred pages with another hundred pages of glossary. Like the full length novel this edition is in five sections, each one featuring a very handsome pen-and-ink illustration by Neill.

Below you will see three examples: Jean Valjean with the priest just before stealing the silver, Cosette looking hungrily into a toy store window,  and the rescue of Marius by Valjean having just emerged from the sewers. 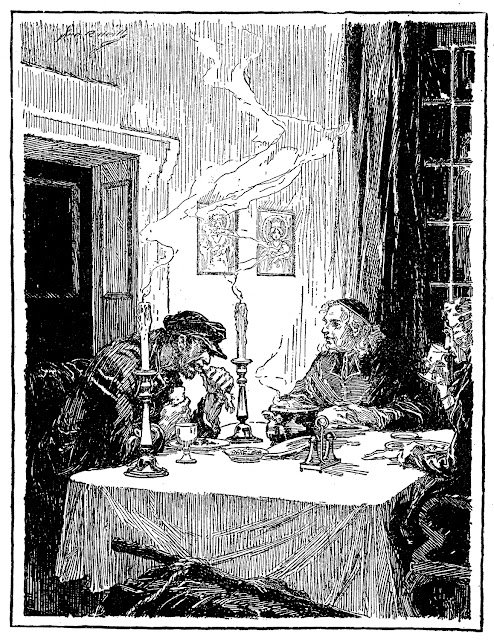 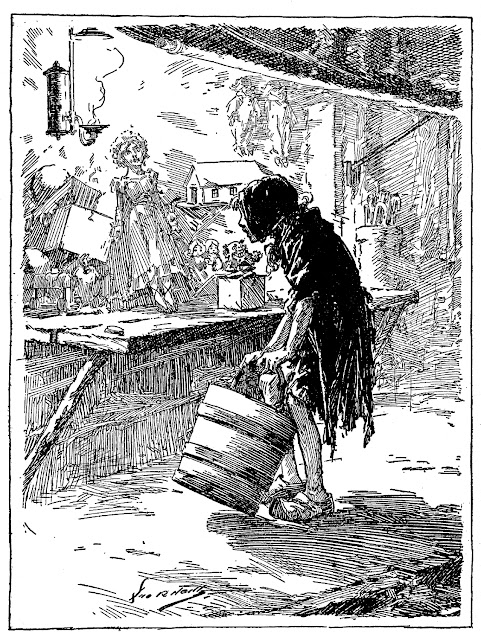 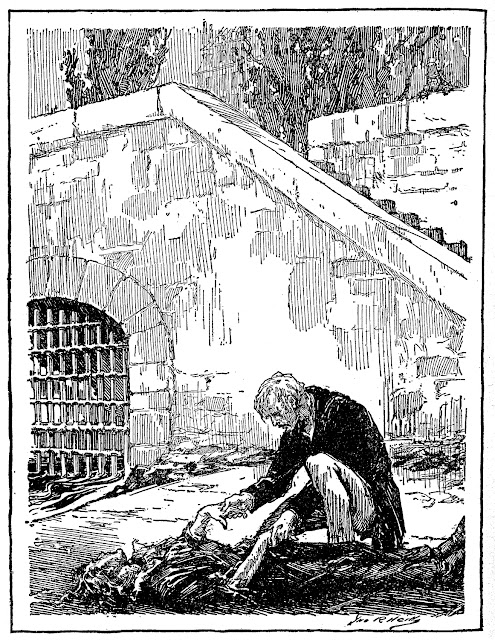 The book is quite handsome, but, alas, it is also quite rare. Below you can see the title page of Neill's own personal copy where has has scribbled his own credit line. He is not credited in the actual book, although his signature appears in each of the five illustrations.

A plus tard, mes amies! 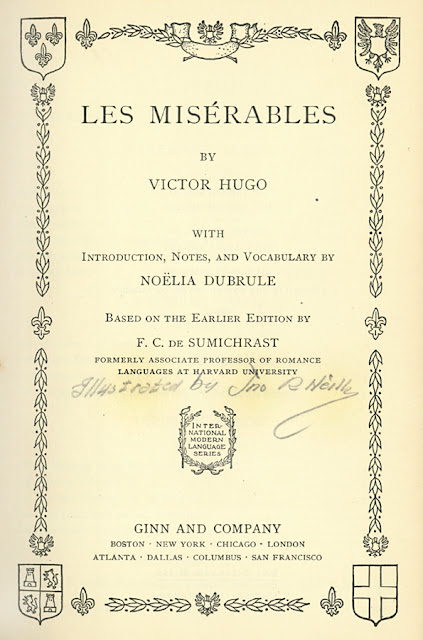