Horsing Around with John R. Neill 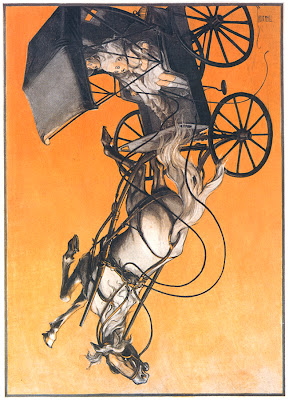 In celebration of the current serialization of Eric Shanower's and Skottie Young's comics adaptation of Dorothy and the Wizard in Oz from Marvel Comics, I thought I might re-share this fascinating Oz piece that I first published as the back cover of Oz-story No. 3 in 1997.

Eric Shanower discovered the piece the first time he visited Joan Neill Farnsworth (Neill's youngest daughter). We made plans to borrow it and have a transparency shot the next time we were both going to visit her.

This is an unused color plate created by John R. Neill for the original 1907 edition of Dorothy and the Wizard in Oz. It is not known why it was rejected. The image, as you can see, shows Zeb, Dorothy, and Jim the Cab-Horse falling through the earth to the land of the Mangaboos. Neill's original painting is not know to survive; but what does survive is a proof copy still in the Neill family archives. The proof is printed on the same paper as the published color plates. 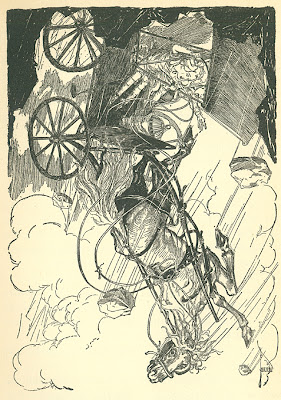 The most likely scenario is that the publisher rejected this image and asked for a new one. The original edition of Dorothy and the Wizard had sixteen color plates and I doubt it was ever meant to have had more.

In any case, Neill redrew this image as a pen-and-ink drawing for the book. The ink version is much stronger. It has a better composition, the addition of the rocks up top and the clouds below give a better sense of place, and Dorothy is a bit better drawn. All this leads me to believe the ink version was created after the color version.

I do have a pet theory for why this color plate might have been rejected.  In some books (not usually Oz books) color plates are sometimes viewed sideways, in landscape mode. If this image is looked at sideways it kind of looks like there's been a buggy accident and little Dorothy is gaping open-mouthed at their dead horse. 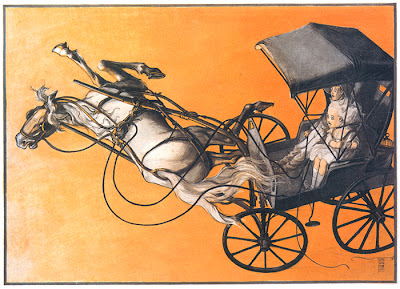 The falling rocks and clouds of the ink version make it clear that buggy and horse are falling. Also note that Eureka (in the birdcage) has been moved from the luggage area in back of the cab in the color version, to the more prominent spot at Dorothy's feet in the pen-and-ink version.

That's it for today's Oz history lesson! Remember to check out the hit new comics adaptation of Dorothy and the Wizard in Oz at your local comic book store. And don't forget that we have copies of the first three Marvel Comics collections available at our online store. If you'd like to get them autographed by Eric Shanower just ask in the "Special Instructions" field during checkout.
Posted by David Maxine at 10:22 PM

I love this! Thanks for posting it--I've never known of this before.

Well, the Oz Club just isn't what it used to be. On the plus side Oz-story No.3 had much higher circulation than the BUGLE would have had.

This is such a fun piece - I was wondering if this proof is only printed in two colors?

I think maybe the colour plate was rejected because the publishers thought it might have seemed to terrifying for children to see, like the Jabberwock illustration in "Looking Glass" (Tenniel did express some concern over that drawing even though it was published later).

While the colours are good and more lively than ink (but not so for Dorothy or the background/surrounding space) the colour version does almost give the impression of them falling into a fiery doom . . .

@Sam - I kind of doubt it. There is so much terror in this book and scary images like cutting Gwig in half and indeed the pen-and-ink version of this drawing is IMHO scarier than this one!

@Bill - I was checking with Peter Hanff to confirm some info he'd shared with me earlier. According to Peter the plates for LAND, DOTWIZ, and EMERALD CITY were printed in only three colors - approximating red, blue and yellow. I'm unsure how closely these matched today's cyan, magenta and yellow - but there was no black plate. The captions were added to the DOTWIZ plates with a fourth pass thru the press but there is no black in the images.

Regarding the proof I don't know - it seems pretty clear there are three colors at work red and yellow making the orange and then this dark grayish black. I see no blue in the plate and am not sure why Dorothy's hair is not blonde. Perhaps they were trying some different technique? Maybe it is two colors orange and black but as I recall the orange looks very complex and not like it was only one color. Thus a bit of a mystery remains.

Interesting - it certainly makes me think of the duotone plates Reilly & Britton printed in various books.

So this plate could indeed be missing a color by accident or it could have been a test to produce a simple style of color plates like in the San Steele first editions which are what first came to my mind when I saw this proof.

Are there many more of these "lost" illustrations out there?
Thanks for sharing this one, otherwise I'd have never seen it!