The Hunt for Pirate Gold 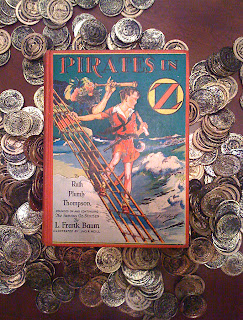 One of the unique traditions of the Winkie Convention is the Treasure Hunt. It is a light-hearted affair, which prompts both old and young to make fools of themselves looking for little things among the plants, wood-bins, under chairs and under teacups, and even sillier places, too.

This year the Oz Treasure Hunt celebrates the eightieth anniversary of Ruth Plumly Thompson's Pirates in Oz. It seems that Captain Salt and Ato and Roger the Read Bird were at Asilomar last weekend.

When it was time to depart, Captain Salt told Ato to haul the pirate luggage (and the many bags of golden treasure) to the Crescent Moon, which was anchored in the parking lot. And Ato was a little careless with one of the bags of gold, and he spilled and lost a great many gold coins - nearly half of Captain Salt's treasure!

Captain Salt really wants his treasure back! So he has asked all of the fine folks attending this year's Winkie Con to help him find the lost coins. He has even offered a reward. So if you're attending this year's Winkie Con, check out your Con Bag and get all the details on how you can help Captain Salt recover his golden treasure! There will be many a reward for its speedy recovery. If you haven't made plans to join us yet, it's still possible.You can download registration forms by clicking here.

And what better way to hunt for Captain Salt's Pirates in Oz gold than in an official Ozzy Pirate t-shirt from the Winkie Con Boutique! Click on a product of interest below - and you'll fit right in!


Shop for a personalized gift at Zazzle.
Posted by David Maxine at 1:30 AM